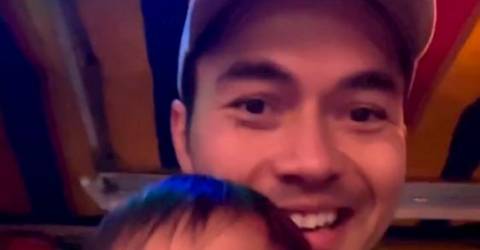 ACTOR Henry Golding recently posted a video of himself and his 19-month-old daughter Lyla having some outside fun.

Lyla can be seen in the footage sitting on Golding’s lap before the two go down a slide together, the toddler grinning the entire way.

“This little face,“ Henry, 35, captioned the video of his daughter on Instagram.

The Last Christmas star and his wife, Liv Lo, welcomed Lyla on March 2021. The pair celebrated their daughter’s first birthday earlier this year, with the proud father posting a lovely selfie of him and Lyla in which she showed all four of her teeth.

In May, the Malaysian-British actor told People magazine that his favourite thing about becoming a father was “seeing her grow and change”.

“[On] Liv’s birthday, little baby decided to really attempt to walk,” he recalled.

“She’s changing so much, so every day is like a treat.”

When asked if his daughter knew her father was a movie star or had watched any of his films, Golding said: “It’s strange, we actually put Crazy Rich Asians on.” Wife Lo added that: “She’s more into Cocomelon right now.”

Golding agreed with his wife’s comment, saying: “Yeah, and she points to the TV and says ‘Cocomelon!’ so she doesn’t care.”

Golding can be seen in Jane Austen adaptation Persuasion on Netflix. Among his upcoming projects is the Paramount animated film The Tiger’s Apprentice, as well as another Netflix film The Old Guard 2, slated for next year.