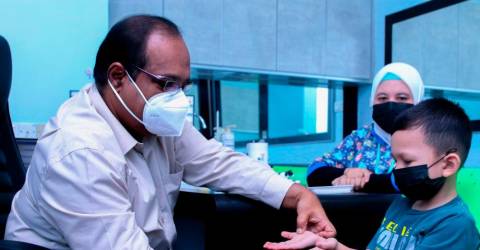 ALOR SETAR: Kedah recorded 24.4 per cent drop in hand, foot and mouth disease (HFMD) cases during the 24th epidemiology week (ME24) from June 12 to 18.

“This has brought the number of HFMD cases in the state between Jan 1 and June 18 to 5,425. A new outbreak of HFMD cases was also reported (during ME24) involving a childcare centre which was ordered to temporarily close under the Prevention and Control of Diseases Act 1988.

“Kuala Muda district recorded the highest number of cases with 1,337 followed by Kulim (806 cases), Kubang Pasu (797) and Kota Setar (537). However, all the reported cases showed mild symptoms,” he said in a statement today.

Dr Mohd Hayati also said that during the Jan 1 to June 18 period, 51 HFMD cases were reported in Kedah, with 50 of these occurring at childcare centres, kindergartens and pre-schools,

“These premises were ordered to temporarily close or to voluntarily close to be sanitised so as to prevent HFMD infection.

“Parents and childcare and early education centres are urged to ensure good hygiene practices at the premises, especially surface cleanliness to prevent infections among the children,” he added. – Bernama