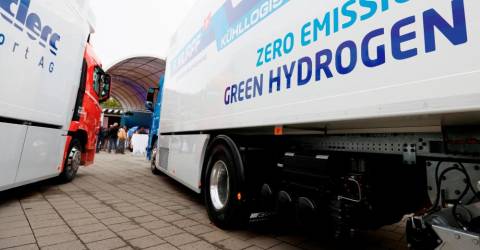 LONDON: Soaring natural gas prices have made hydrogen produced from fossil fuels increasingly uneconomic and spurred more than US$70 billion (RM330.6 billion) of new investment in hydrogen from renewables since war broke out in Ukraine, a report said today (Oct 20).

So-called green or clean hydrogen is made using electrolysers powered by renewable energy to split water from oxygen, while blue hydrogen is made from natural gas with technology to capture and storage the carbon dioxide emissions produced.

Green hydrogen has been touted as key to decarbonising industries that rely on coal, gas and oil – such as steel and chemicals. But the costs of production have traditionally been much higher than other forms of hydrogen.

With gas prices having soared more than 70% on international markets since the start of the war in Ukraine in February, the cost of producing hydrogen from fossil fuels has become more expensive than green hydrogen, the report said.

In Europe, fossil-fuel hydrogen asset owners will see their costs of production rising by roughly 50% more than average green hydrogen costs to US$7.60/kg, while new blue hydrogen in Asia costs 35% more at US$6.40/kg and grey hydrogen is 29% more than green hydrogen.

The continued rapid investment in green hydrogen over the next few years could mean the production cost falls under US$2/kg by 2030, from an average US$3.80-5.80/kg before the war in Ukraine.

This puts more than US$100 billion worth of existing fossil hydrogen assets at risk of becoming stranded assets by 2030, the report said.

Deployment of renewables has been increasing this year as countries try to wean themselves off Russian gas, the International Energy Agency said this week.

Carbon Tracker estimates that 25 countries have committed US$73 billion of public and private funds to the production of green hydrogen since the start of the Ukraine conflict, with Germany, Morocco and the United States pledging the most. – Reuters