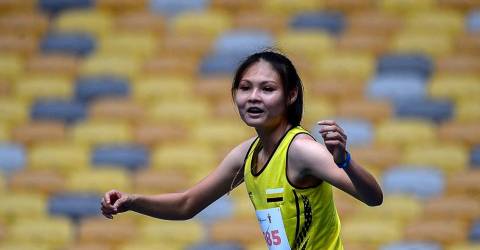 KUALA LUMPUR: For someone who has a sweet tooth, it’s never easy for Perak high jumper Ngu Jia Xin (pix) to keep her weight down.

But’s that exactly what she had to do when she found out that she had to lose five kilogrammes (kg) in just two weeks if she wanted to do well at the 20th Malaysia Games (Sukma).

To her credit, the 22-year-old not only brought her weight down from 60kg to 55kg by eating only breakfast, but she also retained her high jump gold medal after clearing 1.70 metres (m) – just 9 centimetres (cm) lower than her personal best – at the National Stadium in Bukit Jalil here today.

The Pantai Remis-born Jia Xin, who pointed out that she faced similar issues at the Hanoi SEA Games in Vietnam in May which resulted in her finishing fifth after clearing just 1.65m, has vowed not to repeat the mistake.

“I was 60kg plus before the Sukma, so my coach (Aleksandr Gasparyan) told me to reduce it to 55kg.

“After this, I don’t want to indulge too much in eating or even celebrate this success, I want to maintain my weight. Maybe I will eat one or two egg tarts, but no feasting,” she said after the prize-giving ceremony.

Jia Xin initially planned to try and break the Sukma record of 1.75m set by Norliyana Kamaruddin of Negeri Sembilan at the 2010 edition in Melaka but decided against it when she found out that none of the marks for this year’s edition will be ratified as the official record.

Meanwhile, long distance runner Muhammad Ikbolasen Md Kamal Hussain was in a league of his own, to win the men’s 3,000m steeplechase with a dominating run, enroute to setting a new personal best.

The 20-year-old Cameron Highlands lad clocked nine minutes and 15.24 seconds, surpassing his previous personal best of 9:48s and Sukma record of 9:20.25 set by Karthik Jayaram in in the 2010 Melaka Games.

“I am very happy to win my second gold (won 10,000m yesterday) and hoping to complete a hat-trick with a win in the 5,000m tomorrow,” Muhammad Ikbolasen said.

The debutant won the 10,000m clocking 31:11.62s, surpasing M. Arumugam’s 1996 Pahang Sukma record of 31:47.95s yesterday, but the record was not recognised as a new Games record due to the decision made by the National Sports Council (MSN) since the age limit for this edition has been extended to 23 years from 21.

In the women’s event, Johor’s J. Puspa Letchumy (11:52.58s) emerged victorious, while Esther Joy Chen Hong Li (12:23.32s) of Selangor and S. Kothanaayagi (12:48.73s) of Negeri Sembilan managed to place themselves in the podium in second and third places respectively.