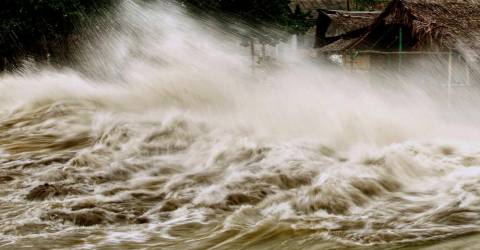 As expected earlier by the Department of Irrigation and Drainage last Sunday, the situation would continue in the states for four days beginning from yesterday (Nov 4).

The department also warned that the phenomenon would be made worse if strong winds, huge waves and heavy rain were to occur simultaneously, in addition to the risk of flash floods, seawater overflow and coastal flooding.

In Kedah, water began to rise in several areas especially in Kuala Kedah at about 11.30pm yesterday, causing water to overflow at village and market areas. However, the waters receded soon afterwards.

State Fire and Rescue Department (JBPM) Operations and Rescue Division assistant director Mohamadul Ehsan Mohd Zain said the high tide is expected to be at its highest at 1.17am tomorrow and the areas at risk would continue to be monitored, especially in Kuala Kedah, Yan, Jerlun and Kuala Muda.

“We reckon that the flood situation in the state will worsen, especially the river bank and estuary areas and victims are expected to be evacuated following the high tide until next Tuesday,“ he said when contacted by Bernama here, today.

A check by Bernama at Seberang Kota market in Kuala Kedah this afternoon found the impact of the water overflow from midnight yesterday was still visible, but the residents and traders in the area were not affected.

“The overflow is a yearly occurence at the fisherman’s market area and we have made early preparation by packing up the goods before the high tide hit last night,“ she said.

In Perak, the high tide phenomenon occurred as high as over one metre at about 4.30am today, causing water to overflow and the low-lying settlements areas along Sungai Perak in Teluk Intan to be inundated in 0.3 metres of water.

A Hilir Perak Disaster Management Committee Secretariat spokesman said 12 areas in the district were affected by the phenomenon but the water began to recede at 7am today and no one has been evacuated, so far.

“The Malaysian Civil Defence Force is constantly monitoring the affected areas, but we fear the situation will worsen if there is heavy rain and should the embankment burst,“ he said.

In Selangor, the situation along the coastline is still under control as integrated monitoring by several Fire and Rescue Stations in collaboration with other disaster agencies were carried out from 4.30am to 7.30am today.

“The tide is above normal level, the houses nearby are still safe, things are under control, no floods with no evacuees and the water began to recede at 7am,“ he said in a statement today.

In Johor, the state JBPM will focus on patrolling, to be on the lookout for the high tide in populated areas along the coast of several districts including Batu Pahat, Pontian, Mersing, Johor Bahru, Kota Tinggi and Muar.

Johor JBPM director Datuk Yahaya Madis said all Fire and Rescue Stations have been instructed to be on stand by to carry out patrol throughout the high tide phenomenon period.

“They must be prepared in terms of manpower and assets to provide assistance to local residents in the event of a flood that requires victims to be evacuated,“ he told Bernama.