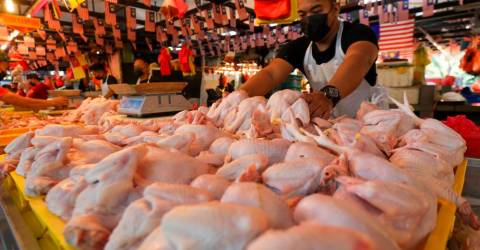 ISKANDAR PUTERI: The opening of many economic sectors under Phase Four of the National Recovery Plan (PPN) has caused a surge in demand for essential items like chicken and cooking oil and led to price increases, the Johor State Assembly was told today.

State Unity, Trade and Consumer Affairs Committee chairman Dr Chong Fat Full said increases in the cost of raw materials such as soya bean and maize and the foreign exchange factor also contributed to the higher prices of chicken.

“Chicken breeders did not expect the opening of the economic sectors, and this situation caused demand to go up and resulted in prices of items like chicken to also increase.

“When there is a surge in demand for chicken, breeders need time to supply chicken and the market will take time to stabilise,” he said.

They wanted to know the action the government was taking to check the increase in prices of essential items especially chicken, cooking oil and vegetables after the state moved into Phase Four of PPN.

Recent checks showed that chicken was sold at between RM9.80 and RM10.30 a kilogramme here.

Answering supplementary questions from Faizul Amri and Sharifah Azizah on the same issue, he said the government had capped the price of a polybag pack of one kilogramme cooking oil at RM2.50.

In addition, the government also implemented a price control programme based on the threshold value of crude palm oil, he added.

However, the current situation was unprecedented and experienced worldwide, and the government needed to balance between the demands of buyers, retailers, wholesalers and manufacturers, Dr Chong added.-Bernama