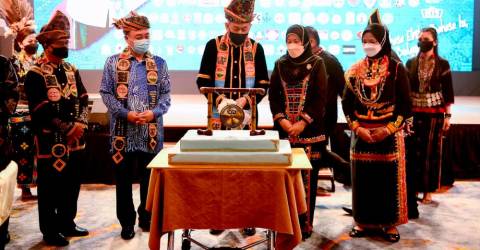 KOTA KINABALU: The associations of the various ethnic groups in Sabah should continue to strengthen their respective cultures, customs and languages, so that they are not swept away by the rapid development of globalisation, said Chief Minister Datuk Hajiji Noor.

He said it is also important that the cultural diversity in the state, comprising of more than 30 ethnic groups and 217 sub-ethnic groups using more than 50 languages ​​with no less than 90 dialects, continue to be strengthened and not marginalised by modernity and technological advancement.

He said the Sabah Ministry of Tourism, Culture and Environment and the Sabah Tourism Board had been also asked to identify ethnic groups that have become or are becoming extinct in the state, so that their rich culture and customs can be highlighted as historical tourism products.

“At least, the ethnic group will not become extinct just like that without knowing its existence in Sabah. I believe there are still many more cultures in terms of multi-ethnic dance and music in the state that are not yet known.

“This is in line with the desire of the state government which wants more of its cultural heritage to be highlighted not only to the outside world but also to our own people who do not yet know it,“ he said here, today.

Hajiji hoped that the younger generation will learn about their own culture to enable every traditional cultural practice to remain.

“We do not want the concern for the contribution of art and culture itself to be eroded by the current rapid development of the globalised world. It is more worrying when we lose our traditional cultural heritage just because there is no heir,” he said.

He said to ensure that every policy and initiative carried out by the government meets the demands of the people, especially in Sabah, the formation of a union policy in ethnic diversity could indirectly boost Sabah’s tourism to the outside world.

“With the concept of the union of ethnic diversity, it can balance the tourism sector through the intersection of cultures, customs, ethnic languages, traditional musical instruments, traditional food and ethnic clothing.

“This effort can boost the tourism sector in the state, because tourism is one of the main thrusts in the Sabah Maju Jaya Roadmap,“ he said.