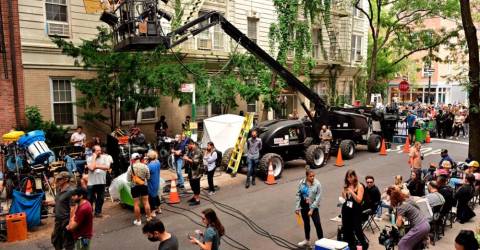 LATE on Saturday, negotiators for the International Alliance of Theatrical Stage Employees (IATSE) and the Alliance of Motion Picture and Television Producers (AMPTP) settled on a deal that would avert a potential industry-crippling workers’ strike planned for today.

The last-minute deal saw a tentative agreement reached on key issues demanded by IATSE, including increased pay for the likes of assistants and script coordinators, meal break penalties, increased rest period and more.

IATSE represents below-the-line workers such as costume and set designers, makeup artists, script coordinators, camera operators and many more of the on-set workers that are not the actors, directors or writers.

For months, the union’s leadership has been negotiation for a new labour deal with the AMPTP, which represents the studios and production companies.

Last Wednesday, nearly 98% of the 60,000-strong union members voted to strike, with over 20 picketing sites planned across the country. “Assume there will be a strike and hope there isn’t,” local members were told.

It is worth noting that the IATSE represents over 150,000 workers in the entertainment industry, in both the United States and Canada.

When news broke that a deal had been reached, reactions from IATSE representatives was initially positive.

“Everything achieved was because you, the members, stood up and gave us the power to change the course of these negotiations,“ leaders of Hollywood’s 13 local unions said in a statement to their members. “Our solidarity, at both the leadership and rank and file level, was the primary reason that no local was left behind and every priority was addressed.”

“This is a Hollywood ending,” said IATSE International President Matthew Loeb, one of the key figures in pushing for the strike in the first place. “Our members stood firm. They’re tough and united.”

However, the terms of the deal will still need to be ratified by IATSE members before the strike is officially called off, and once more details began emerging, members began voicing skepticism via social media, saying that it had “failed to meet critical demands”.

Capturing some of that concern was a tweet from Franklin Leonard, the founder of the Black List and a prominent voice for equity in Hollywood. After tweeting about the deal, he added: “Fascinating that leadership is hanging a mission accomplished banner and so many members have jumped in my mentions to assert that they are not a fan of this deal. Genuinely curious how representative of the rank and file they are.”

As with the three-month Writers Guild of America strike 14 years ago, an IATSE strike would deal a massive blow to an industry that is slowly pulling itself off the ground from pandemic-induced shutdowns.

If the strike does end up taking place, virtually every US-based TV and film production, including those still in postproduction, would effectively come to a halt.