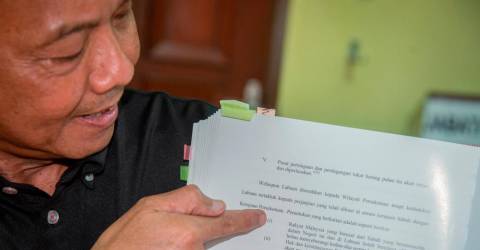 LABUAN: The Home Ministry has been urged to review the implementation of immigration checks at the Labuan ferry terminal, which started on Nov 1.

In making the call, Sabah PKR secretary Simsudin Sidek (pix) said the move does not conform with the agreement between the Sabah government and the federal government on the handing over of Labuan as a Federal Territory.

“From a study at the Labuan Department of Museums Malaysia, we find that the agreement states that Sabahans who reside in the state and Labuan can commute freely across the two borders.

“This agreement must be respected for the wellbeing of the locals,” he told Bernama today.

As such, he said a memorandum would be sent to Home Minister Datuk Seri Saifuddin Nasution Ismail soon to ask for a review of the immigration checks, which have caused dissatisfaction among the locals.

“Based on the agreement, we find that there is no need for the people of Sabah and Labuan to undergo the immigration checks.

“Instead, checks should be conducted on non-Sabahan travellers such as citizens from the peninsula, and there should be special lanes for the people of Sabah and Labuan passing through the ferry terminal,” he said.

Simsudin, who is also Labuan PKR division chief, said that the immigration checks were unsystematic and chaotic, resulting in long vehicle queues and congestion at Jalan Merdeka daily.

“The situation is worst at the Menumbok ferry terminal, which saw those with families, small children and elderly parents have to stand in line for an hour to go through the immigration checks to return to Labuan.

“Why the need for immigration checks at the border for locals returning to their hometown?” he said.

On Sept 10, the Home Ministry instructed the Immigration Department to enforce stricter control at the two Labuan ferry terminals, especially for non-Sabahan travellers bound for the Sabah mainland.

The then minister Datuk Seri Hamzah Zainudin said this was to ensure there would be no free flow of travellers at the main gate of the ferry terminals to mainland Sabah via Tanjung Pagar Sipitang, Menumbok and Jesselton jetties.-Bernama