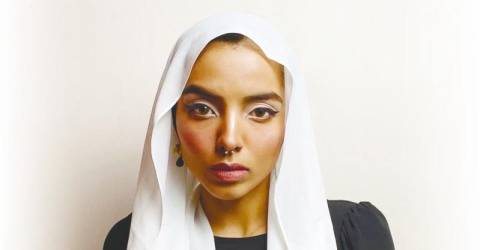 IN MALAYSIA, you can find a variety of vegan cuisine, but they are mostly Thai or western dishes or desserts.

Although many vegans have attempted to veganise Malaysian dishes, Aisya Jabaruddin has turned it up a notch by creating her own version of vegan Malay food.

Aisya, as she is known, said going vegan does not mean eating tasteless food.

“When you become a vegan, you don’t to have compromise when it comes to taste, or forego your favourite food,” said the digital marketer, who experiments with vegan cuisine and shares her discoveries on social media.

The dishes that she posts are based on food that she loved to eat before she went vegan six years ago.

At a glance, one would find it hard to differentiate between authentic Malay dishes with real meat and Aisyah’s vegan creations, as the food is presented in the same style. It takes a very sharp eye to tell them apart.

During the MCO in June last year, Aisya and her husband started an online business, Mushroom Lah (mushroomlah.com), selling her signature Mushroom Rendang, made fresh daily before delivery.

Her vegan rendang looks exactly like any regular meat rendang dish, except she uses mushrooms instead of meat.

Aisya, who is also a content creator and photographer, with a degree in forestry science to boot, said her rendang has been well received among her customers, which include celebrities and social media influencers.

What inspired you to turn vegan?

“I turned vegan mainly due to animal cruelty and the environment. I believe that if everyone were to go vegan, we could curb animal cruelty, reduce greenhouse emissions, and save water, forests, animals and much more.”

What challenges did you face in your journey to becoming a vegan?

“It was hard to explain why I chose this path when I first started. Luckily, my family is very understanding [and] after a while, I think more people are now aware of veganism. So, things are getting better.

“I still encounter people who think veganism is similar to vegetarianism. Sometimes when I eat out, I find dairy products or eggs in my food even when the menu is labelled “vegan”.

“But I am glad there are many restaurants that are 100% vegan that I can go to without any worries. My favourites are Sala KL, Sushi Kitchen, Loving Cafe, Pinxin Vegan, PB Kitchen and Hijau KL.”

What misconceptions are there about veganism?

“’Going vegan is expensive’ is the most common one. Vegan food is inexpensive. It’s only when you eat imported vegan products every single day that it gets expensive. Malaysia is blessed with so much locally grown produce that can easily be used to prepare a delicious vegan meal. Vegetables, fruits, grains, tofu and beans are all vegan.”

What motivated you to veganise Malay dishes?

“My goal is to spread more awareness on veganism. This is because people are always thinking that vegan means only eating a big bowl of salad or some boring tofu. Hence, the reason I am showing all these amazing dishes that can be prepared vegan-style.”

How did come up with the recipe for your Mushroom Rendang?

“Mostly by watching my mum making her rendang, and fixing it here and there to suit my liking.”

What motivated you to start an online business?

“I started Mushroom Lah because I felt it was hard to find vegan rendang that suited my taste and was prepared just like how my mum would make it during Hari Raya. So I started it with my husband, Akmal. I also want to show people that you don’t need to have chicken or beef rendang to celebrate Raya. We are very thankful that our rendang is loved by many, including non-vegans.”

What challenges did you encounter?

“In the beginning, it was hard to convince people that our Mushroom Rendang was just as good. But over time, I managed to capture many hearts with the rendang and our lovely customers supported us so much along the way. So, here we are!”

What are your future plans?

“I plan to use my social platform to reach more people through my recipes. And for Mushroom Lah, we have just started releasing our Travel Pack that can be shipped throughout Malaysia and hopefully, outside Malaysia soon.”