A homeowner has captured the unbelievable moment a giant carpet python slithered over her backyard fence.

Rhoda Earl, from Calamvale in Brisbane, was unfazed after seeing the huge snake move across her yard on Wednesday night – despite its monster size.

‘How absolutely awesome to see this amazing guy on our fence tonight,’ she said.

After sharing the video to Facebook, it was flooded with comments from other amazed snake lovers, but many warned her to lock her pets inside.

Speaking to Daily Mail Australia, the wildlife carer said she wasn’t at all nervous after spotting the large snake.

‘I was overjoyed and excited to see it. I’d seen it before roughly 12 months ago. It was smaller but by the pattern I am positive its the same snake,’ Ms Earl said.

‘I’ve seen snakes of that size many times because I used to live in the country.’

The nature lover also said the snake had likely tucked into a big meal because there was a nest of mice and rats nearby.

While Ms Earl was impressed by the massive snake, others admitted they wouldn’t be so calm.

‘OMG I would run so fast,’ one wrote.

‘Jesus, that’s a big one,’ another commented.

Carpet pythons can grow up to 13 feet long. The snake spotted at Ms Earl’s home appeared to be more than three metres in length.

The pythons are non-poisonous but can still cause pain to a person if bitten.

They are found in every state but Tasmania, and can live in environments ranging from tropical rainforests to deserts. 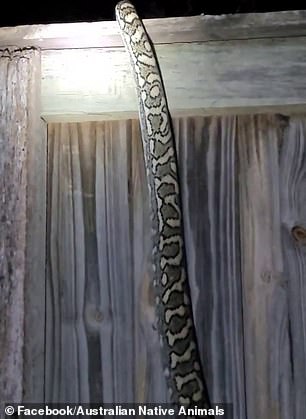 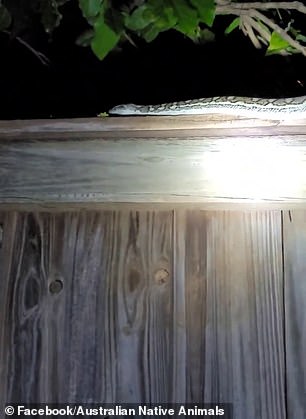