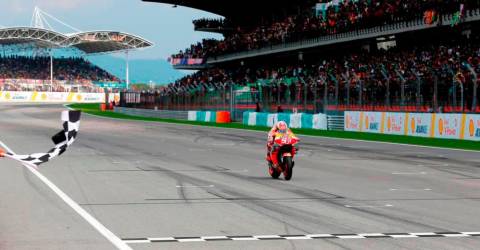 KUALA LUMPUR: There is still a chance for motor racing fans to see a local ace compete in the Malaysian Grand Prix (GP) at the Sepang International Circuit (SIC) in October.

SIC Racing team manager Muhammad Zulfahmi Khairuddin said they are doing all they can to ensure a local rider will receive the wild card ticket to compete at Sepang.

Without revealing the rider’s name, the former national Moto2 ace said he was currently in Portugal to seek opportunities for collaborations with several international teams.

He said that although many were keen to see a local rider in action at Sepang, many aspects had to be taken into consideration, among them the congested race schedule that the rider would face should he receive the wild card ticket.

“We have to take many aspects into consideration because a week after the Malaysian GP is the World JuniorGP Championship in Valencia. So, (the schedule) is really very tight and we also need to find a spare bike because we can’t use the JuniorGP machine.

“There are many things going on behind the scene, so we have to manage the best we can to make the wild card a success in Sepang,” he told an online media conference today.

Previously, local media had reported that national ace Syarifuddin Azman, who is better known as Damok, could be the one to fill the Moto3 wild card slot at the Malaysian GP based on his performance in this season’s World JuniorGP Championship campaign.

Muhammad Zulfahmi, however, said: “the rider has yet to be announced, most likely Damok but we cannot confirm this now… at the last minute we may not get the confirmation from IRTA (International Road Racing Teams’ Association).”

According to him, they would only receive the IRTA confirmation about two weeks before the start of the Oct 21-23 Malaysian GP.

Meanwhile, Damok, who rides for the SIC Racing team, is determined to take his excellent momentum into round five of the JuniorGP at the Algarve International Circuit in Portimao, Portugal this weekend.

“I am targeting another podium finish to regain my spot in the top three… in terms of my bike, I will maintain the setup from the previous race and I am confident that my machine and team will take me back to a podium finish, just like in Barcelona,” he said.

Damok, who finished second in two races at the Circuit de Barcelona in Spain last week, has accumulated 77 points to be placed fifth among 36 riders.-Bernama