A dog double act have shown off their hundreds of new tricks including riding a skateboard and hopping on two legs.

The fluffy friends like to spend their time jumping through hoops for their proud owner Tiffany Hughes, instead of simply fetching sticks.

Footage shows the excitable pups perfectly sitting at the call of their owner in Los Angeles, California.

One of the owners is pulled by the hounds which are attached to a structure used for transporting wood and furniture. They speedily drive them across a countryside track in the clip from near their family home in Los Angeles

Bella the Queensland Blue Heeler is then seen sitting on a skate board, in the clip shared on December 13.

The 15-year-old cattle dog, who is wearing a red neckerchief and paw-print patterned onesie, is then pushed along by one of the other beloved pets, who is resting the front paws on the skateboard and back legs on the ground.

Moments later, two of the Heelers’ dogs balance on their back legs in front of Tiffany as though they are waiting for a snack.

The fluffy friends then show of their jumping and leap across a pole – proving their need for a high-energy lifestyle. 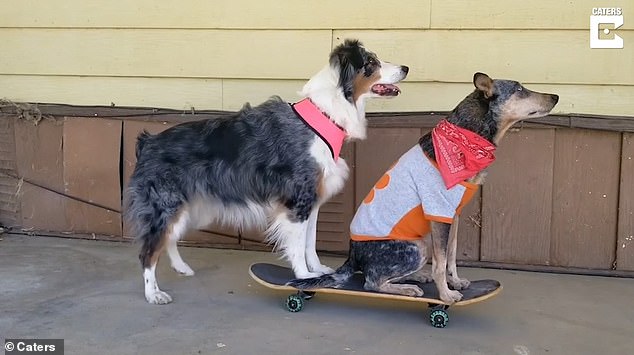 Two dogs have been filmed performing hundreds of new tricks including a skateboard ride at their home. Owner Tiffany Hughes then high fives both pooches, who are wearing matching jackets, in syncronisation 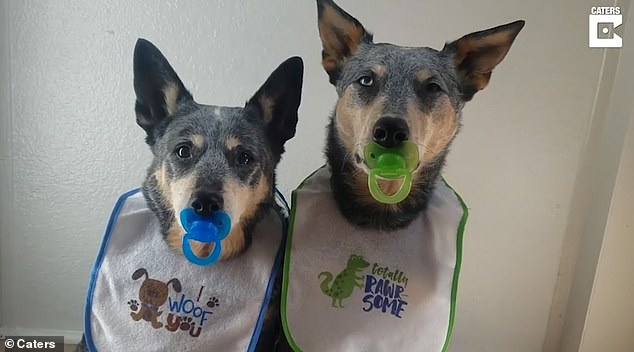 The Queensland Blue Heeler’s wear dummies and bibs reading ‘totally rawr some’ and ‘I woof you’ in the video, shared on December 13

Tiffany holds the dog’s front paws, who is said to be called Terra or Kronos, who is sat on his back legs, to make an O shape.

Bella then leaps back and forth between and across the top of Tiffany’s arms and the other dog’s front legs.

The animal-lover then high fives both pooches, who are wearing matching jackets, in syncronisation. 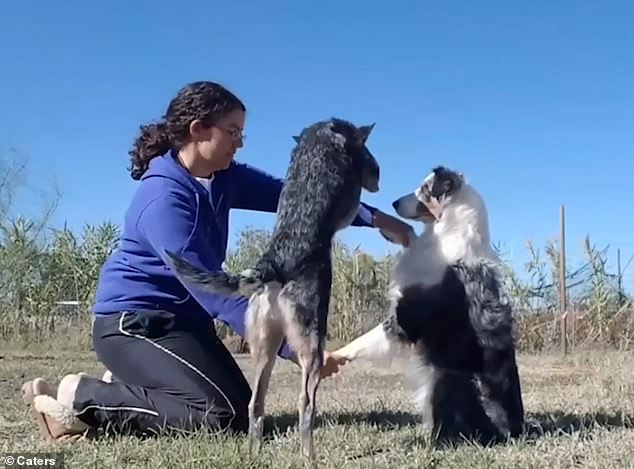 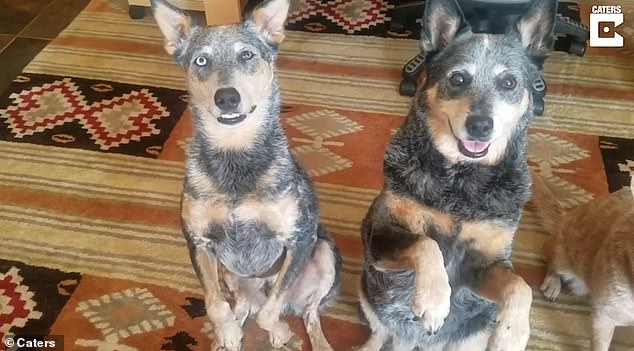 They jump on their hind legs, circle a wooden beam and carry a lead together in a comical round-up of their tricks.

Footage then shows the fluffy black-and-white pooch snuggling up to teddy bear wearing a top embroidered with the United States flag, next to Bella who is clutching an orange dinosaur teddy in her mouth.

The adorable pair don patterned neckerchiefs and prove their athletic ability in a series of clips jumping across barriers.

Their leads are attached to a cart and pulls one of their owner’s who is standing on top. 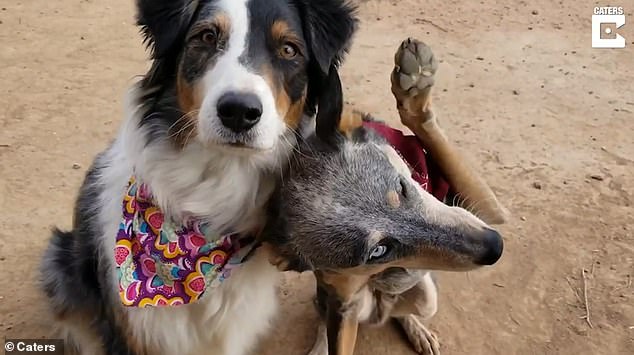 The pair appear close friends as they nuzzle up for a cute photo. The adorable pair don patterned neckerchiefs and prove their athletic ability in a series of clips jumping across barriers