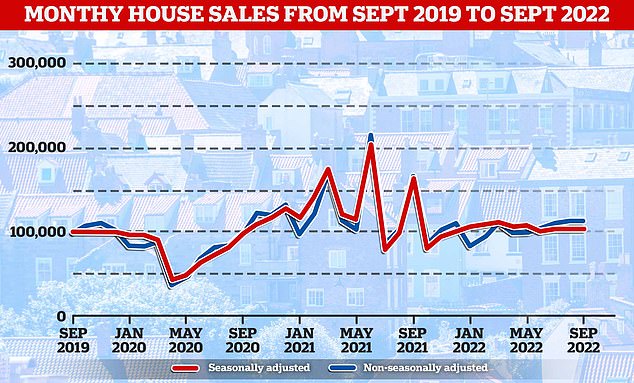 By Sukhmani Sethi For Mailonline

The number of homes sold in September this year was more than a third lower compared with September 2021, according to figures from HM Revenue and Customs (HMRC).

Across the UK, 103,930 sales of homes took place in September this year, which was broadly unchanged from a month earlier in August.

Year-on-year comparisons have been distorted by several big spikes in house sales that happened last year, as buyers rushed to complete transactions before a stamp duty holiday was phased out.

There were significant peaks in transactions during March, June and September 2021.

The number of homes sold in September this year was more than a third lower compared with September 2021, according to figures from HM Revenue and Customs (HMRC)

The report said: ‘UK residential transactions have been stable in recent months but remain elevated above pre-coronavirus levels.’

Mortgage rates have risen sharply in recent weeks, amid the fallout from the mini-budget.

Bank of England base rate rises have also been pushing up mortgage rates – and further rises to the base rate are expected.

Some home buyers who already have a mortgage in place may be pressing ahead while others may choose to sit it out for a while to see what happens to mortgage rates and house prices in the coming months.

Nick Leeming, chairman of estate agent Jackson-Stops, said: ‘The reality is that any change in (Conservative party) leadership could lead to a change in direction for policy and ministers posts, creating an even greater sense of ambiguity that the market will have to respond to.

He added: ‘Any annual comparisons will of course paint a different picture but it’s important to keep in mind that the levels of activity seen in late 2020 and throughout 2021 were the exception not the rule. 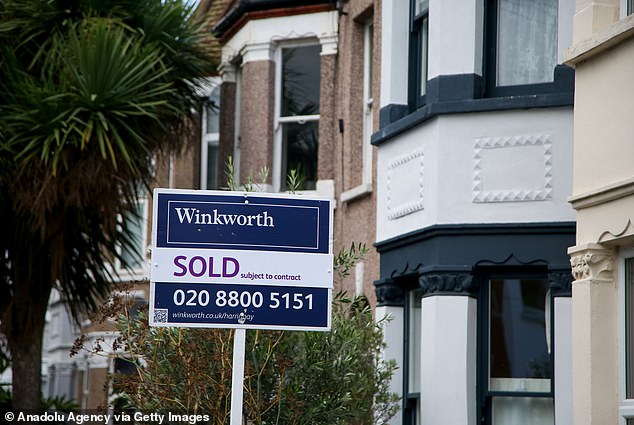 ‘Many areas of the country remain underpinned by unsatisfied buyer demand, while properties at the top and mid end of the market continue to perform well across the national Jackson-Stops network, particularly in Chichester, Newmarket, Northampton and Woking.’

Mark Harris, chief executive of mortgage broker SPF Private Clients said: ‘The majority of homeowners are insulated from rising interest rates as they are on fixed rates.

‘Those coming to the end of these deals either now or in the near future are in for a payment shock as fixed rates are priced considerably higher than the deals borrowers originally took out.

‘A base rate tracker with no early repayment charges may be a better alternative until fixed-rate pricing settles down.

‘Those who are already mid-transaction are keen to proceed with a mortgage offer secured some time ago, which is likely to look particularly attractive now.’

Jason Tebb, chief executive officer of property search website OnTheMarket.com, said: ‘Our own data indicates that sentiment remained positive in September with 79% of sellers confident they could complete a sale within the next three months.

‘We wait to see what impact further political events and the appointment of another Prime Minister will have on buyer and seller sentiment, which so far has proven to be remarkably robust.

‘As interest rates and the cost of living continue to rise, buyers have less buying power so new properties coming to market must be priced realistically.’

Mike Scott, chief analyst at estate agency Yopa said: ‘These figures relate to sales that were agreed earlier in the year, but they do show that the housing market continued to show surprising resilience in the face of the rising cost of living and other economic pressures.’