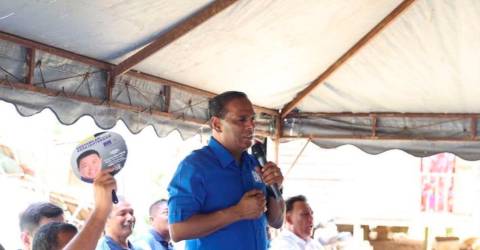 TAPAH: The people of Tapah are currently in need of sufficient affordable housing in line with the increased population in the parliamentary constituency.

Tapah parliamentary seat incumbent Datuk Seri M. Saravanan (pix) said, so far, 2,000 residential units of the 1Malaysia Housing Programme (PR1MA) had been built in Tapah, and an additional 5,000 units will be built within the next five years.

The MIC deputy president, who is the Barisan Nasional (BN) candidate to defend the Tapah parliamentary seat in the 15th general election (GE15), said that besides housing, another issue he is highlighting involves education for locals.

“The most critical needs in Tapah are in terms of housing and education,” the Minister of Human Resources told Bernama when met during his visit to Tapah town today.

In GE14, Saravanan, who has held the Tapah parliamentary seat since 2008, won the seat with a majority of 614 votes, defeating Mohamed Azni of PKR and PAS candidate Norazli Musa.