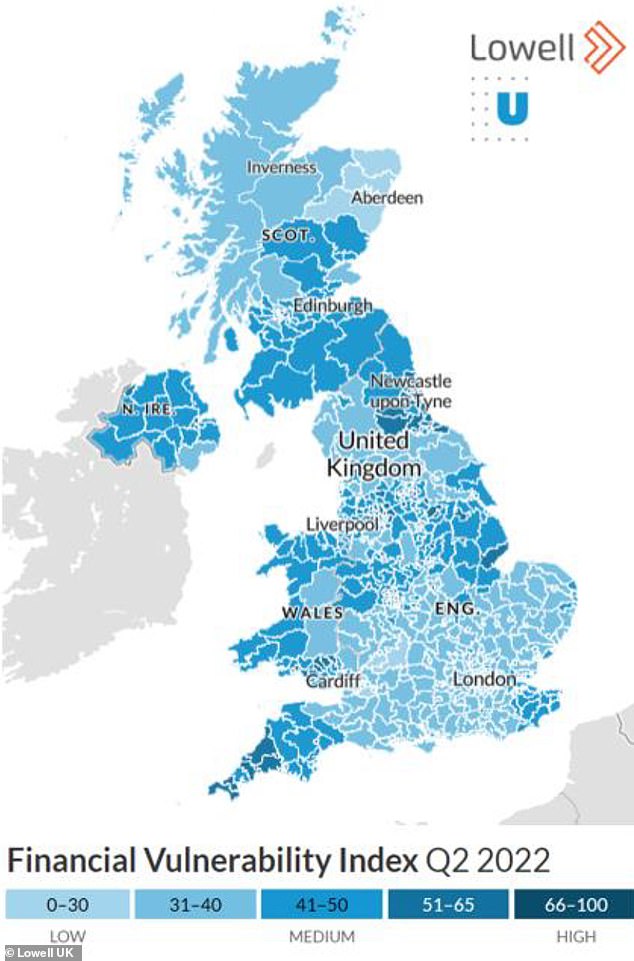 Many in the north east and south west of England, Northern Ireland, and Wales in particular are facing concerning financial hardship, new findings from debt collection firm Lowell suggest.

Lowell’s data also suggests surging use of credit to pay for goods or services over the last few months, which is consistent with the Bank of England’s latest findings that credit card borrowing rose at the fastest annual pace since 2005 in July.

Vulnerability: A map showing variations in personal financial vulnerability across the UK

The online interactive search tool enables users to type in a postcode or area and take a closer look at, for instance, average credit use, the percentage of people in default, taking out high-cost loans or claiming social benefits near where they live.

Consumer defaults are on the rise again, reversing their post-pandemic downward trend, and are up 7 per cent since the index was first launched in 2017.

‘Despite interest rate rises, there has been no shift in the appetite for borrowing. This suggests that for these consumers, borrowing is not a choice but a necessity’, Lowell said.

John Pears, UK chief executive at Lowell, said: ‘The cost of living is increasing across the board and households are having to fork out more money to pay for essentials like food and bills.

‘With the rising cost of living stretching budgets to their limit, people are turning to credit more and more.

‘For many now, a single income shock can be enough to push a household into problem debt. People need help to reduce costs.

‘The new government needs to take action to ensure households, especially the lowest incomes, get the support they need. With the recent changes to the price cap, bringing energy bills down has to be the priority. This needs to be at the top of the agenda.’

Signe-Mary McKernan, vice president at the Urban Institute, said: ‘While the share of adults claiming social benefits and using high-cost loans has declined, families are likely using credit to keep up with the increased cost of living.

‘Financial vulnerability is currently lower, but looking ahead, there are concerning signs that families in the UK may be balancing on the edge of a financial cliff.’

‘Financial vulnerability’ in the UK has declined overall since the last update to the index, primarily due to the fall in the share of adults claiming social benefits, the findings claim.

It added: ‘This is likely due to strong demand for labour, which suggests that the remaining share of adults claiming social benefits consists of the entrenched unemployed.’

Payday lending rates continue to fall, suggesting that the doorstep lending industry is in a long-term decline as a result of regulatory interventions in the high-cost loans market.

There has been a slight increase in the use of high-cost loans recently, Lowell added, but noting that the longer-term trend is on the decline.

As well as surging food costs, Britons are facing an 80 per cent increase in the energy price cap which could plunge millions into fuel poverty.

The Consumer Prices Index rose by 10.1 per cent in the 12 months to July, up from 9.4 per cent in June. The spike was largely driven by surging wholesale energy prices and the rising cost of basic essentials.

Inflation in the UK could top 22 per cent next year, close to the post-war record set in 1975, if wholesale energy prices remain at current high levels, experts at Goldman Sachs have warned.

To date, Bank of England top brass have increased UK interest rates to 1.75 per cent, and this is expected to rise further in the coming months.

The economy ended August on a much weaker footing than previously thought as overall business activity contracted for the first time since February 2021 in a clear signal of recession, a closely-watched survey revealed today.

Data company S&P Global revised down its composite Purchasing Managers’ Index, which covers the services and manufacturing sectors, to 49.6 from a preliminary ‘flash’ August reading of 50.9. A reading below 50 shows contraction.