I loved Bible stories as a child, so when I left school I took myself off to Jerusalem to find where its main characters had once walked. Decades later, I still return several times a year and always find something to inspire me. The golden stone, the landscape, the intoxicating smell of herbs in the markets and the spiritual atmosphere of the Old City draw me back. Ironically perhaps, it has become a place where I always feel at peace.

Tourists levels in Israel are now at a record high. Last year the country received 4.1 million visitors – a 39 per cent increase in two years. It’s a truly wonderful place to explore but it may feel a little overwhelming without some insider knowledge.

So here’s my guide on how to enjoy the best this glorious city has to offer.

Holy land: Hundreds of visitors congregate at the Western Wall, which is the last remaining wall of the ancient Jewish Temple

Four days is a perfect amount of time for a visit. Try not to arrive between sundown on Friday and sundown on Saturday: it is the Jewish Sabbath, so there is no public transport, and most shops, restaurants and tourist sites are closed.

Buy a Jerusalem City Pass (£28 for one week) as it allows a return transfer from Tel Aviv’s Ben Gurion airport, plus unlimited use of public transport and entry discounts to attractions. A new high-speed train takes passengers from the airport to the centre of Jerusalem in 20 minutes and costs £3.50. Set aside about £55 for a private taxi – but a sherut, or shared taxi, for up to ten costs around £14.50pp to a specific location.

Lively Ben Yehuda Street has several hotels and is ideal for shops, cafes and souvenirs, as does the German Colony neighbourhood, which is just five minutes from The First Station. The city’s original railway station, revamped a few years ago, is now a hub of entertainment, dancing, great food and art.

My favourite boutique hotel chain is the Atlas Group, which runs contemporary, well-located hotels with friendly, helpful staff. The Harmony, close to Ben Yehuda, is my number one choice (atlas.co.il/harmony-hotel-jerusalem). Most rooms are modern and cost about £180 per night, including breakfast. Do try burekas: small flaky pastry parcels filled with a variety of vegetables, or shakshuka – a spicy, hearty dish of baked eggs and tomatoes.

You’ll need strong nerves to drive here. The roads are good but Israeli drivers are impatient and hoot continually, especially at traffic lights. That said, satnav Waze, invented in Israel, will help you to find your way.

Taxis are plentiful and reasonable (tips are not expected) but do insist that the driver uses the meter – if they refuse, get out.

Local buses cost £1.20 a trip, but drivers don’t take cash so you’ll need a Rav Kav travel card in advance, which can also be used on the Jerusalem Light Rail (egged.co.il/Article-786-Rav-Kav-Card.aspx tells you what to do).

DO I NEED A GUIDE?

If it is your first time visiting the city, ask your hotel about tours and private guides. Alternatively, try touristisrael.com, but make sure the guide is licensed with the Ministry of Tourism.

The cost of a guide plus driver will be about £220 per person per day. Carry water with you at all times – the air is dry in Jerusalem and it’s easy to get dehydrated. 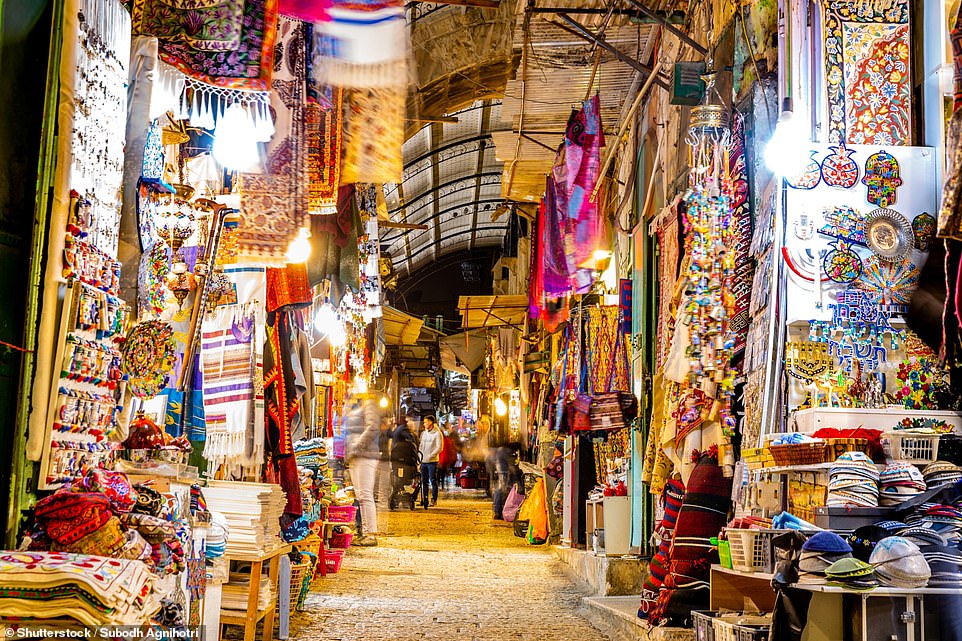 Shopping paradise: A colourful market in the Muslim Quarter of the city, selling everything from clothes to souvenirs

Several imposing gates let you into the Old City but I would use the Jaffa Gate, as it leads to all four quarters: Christian, Jewish, Muslim and Armenian. Cars and buses are banned here and each quarter is very different, but all contribute to Jerusalem’s unique feeling of holiness and spirituality.

The first treat once you enter the Jaffa Gate is the colourful, bustling market (shuk) that weaves its way through countless narrow alleyways. Shops here sell clothes, exotic beads, colourful ceramic bowls, religious artefacts and much more. Do haggle. The Arab stallholders invariably quote a price that has no bearing on what they will eventually take. Start to walk away and you’ll get a good deal. 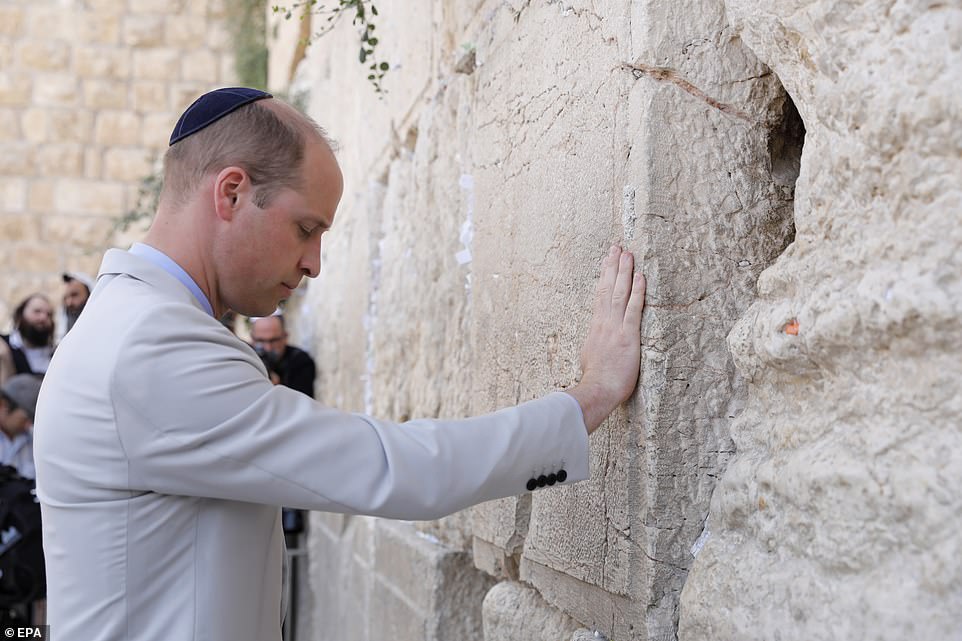 Customary: Prince William (above) visited Jerusalem last June, where he posted a prayer at the Western Wall

Early birds can visit The Church of the Holy Sepulchre from 5am. This major pilgrimage centre is where Christians believe Jesus was crucified, buried and resurrected. Today it’s a working church shared by Roman Catholics, Greek Orthodox, Coptic, Syrian Orthodox and Armenian Christians.

The Western Wall is the last remaining wall of the ancient Jewish Temple and a must for Jews and non-Jews from all over the world who pray there. Prince William visited the site in June 2018 and, as is customary, wrote a prayer on a piece of paper to slip between the Wall’s cracks. Don’t worry if you didn’t come prepared – pencils and paper are freely available from nearby tables.

The Muslim quarter is the home of the Dome of the Rock, where Muslims believe that Mohammed ascended to Heaven. The shrine, with its magnificent golden dome, is an extraordinary example of Islamic architecture. It is open to all faiths but non-Muslims can’t enter the area during Fridays and prayer times. Security is tight.

The Armenian Quarter is the smallest and quietest quarter, with the least changed alleyways.

On my last visit, a shopkeeper in his 80s, who has been there since before the Second World War, related riveting stories. Climb a flight of stairs here to go on an amazing Rampart Walk for splendid views over Jerusalem, or look down to see archaeological excavations of thousands of years ago.

If you choose just one museum, go to the Israel Museum in the Givat Ram neighbourhood. It is also open on Saturdays, when most places are closed. The Shrine of the Book, a dome-shaped monument in the grounds, houses the Dead Sea Scrolls, found in Qumran in 1946. The airy museum itself houses art exhibitions and the most extensive holdings of biblical and Holy Land archaeology in the world.

Mahane Yehuda Market is a must if you like food and people-watching. It’s a riot of 250 stalls, with vendors selling everything from fruit, vegetables, spices and breads to umpteen souvenirs.

It has also become a trendy evening destination. Bars, live music and often tiny restaurants have sprung up along the alleyways, many providing the best food in the city (en.machne.co.il). 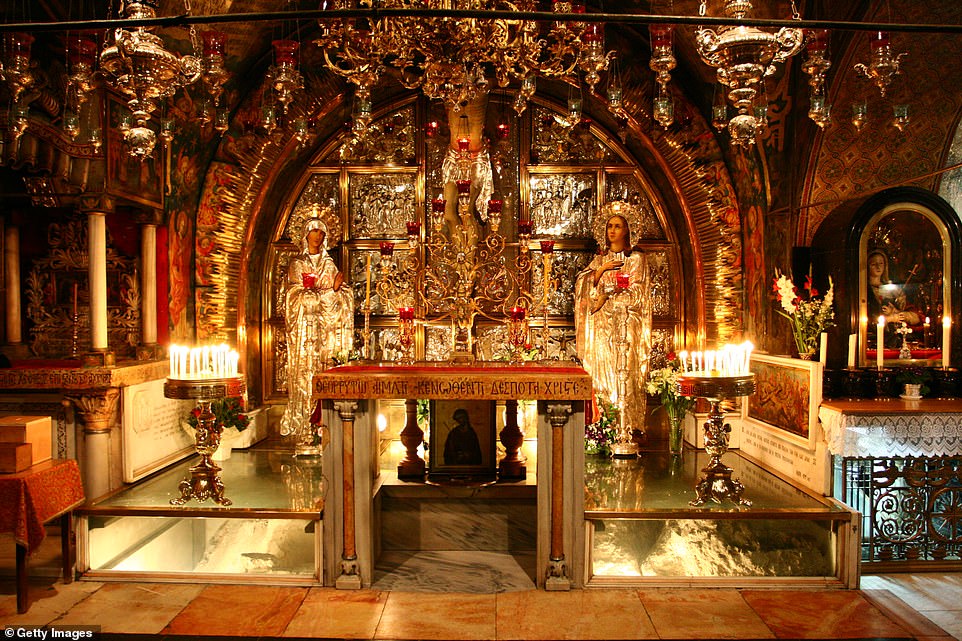 Spreading the faith: The ornate Church of the Holy Sepulchre, which is where Christians believe Jesus was crucified, buried and resurrected

The cuisine is as diverse as the population, but you must taste the houmous, aubergines, tahini and rugelach – mini-croissant-like pastries filled with chocolate.

It’s easy to eat healthily in Jerusalem, not least because they make a huge variety of salads, ideal for hot days. Most restaurants are kosher, so you won’t find bacon. Most will offer either meat, fish, dairy or vegan choices.

Hotel breakfasts offer vast buffets. But should you feel peckish at lunchtime, try Moshiko at 5 Ben Yehuda Street for a delicious falafel in pitta bread, salad and tahini.

As you are in Israel, why not head to fun-loving Tel Aviv, with its promenade, great beach, art galleries and restaurants. For more spirituality, visit Nazareth, 90 miles from Jerusalem, or Bethlehem, in the Palestinian Authority, just six miles away.

The most unusual trip you could take would be to Ein Gedi (eingedi.co.il), 50 miles south beside the Dead Sea. It is the lowest place on Earth, the air is rich, the landscape lunar and the unique multi-coloured Botanical Garden in Kibbutz Ein Gedi is how I imagine paradise on Earth. The kibbutz also has a hotel, restaurant and spa. Close by is Masada, an extraordinary ancient fortification on a hilltop where King Herod the Great built two palaces: it’s one of Israel’s most popular sites. It’s a truly reviving place for rest and contemplation.

As a regular visitor to Jerusalem, I feel safer there than in London. Arabs and Jews use the same malls, buses and markets. Nor is it dangerous to wonder about the city at night. Security and safety are naturally taken seriously but you need not be alarmed to see young men and women holding machine guns: military service is required for almost all Israeli citizens over the age of 18 and their weapons must stay with them at all times.