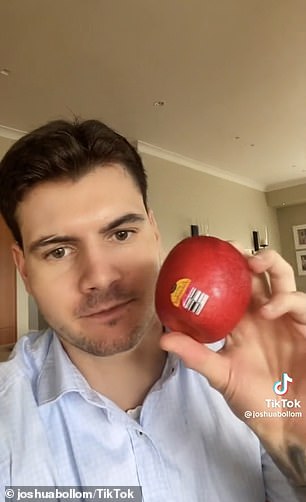 Shopper reveals little-known code that tells you if your supermarket fruit has been sprayed with chemicals: ‘Look closely and all will be revealed’

A TikToker has gone viral after revealing a little-known ‘hack’ about supermarket fruit.

Joshua Bollom, from Sydney, discovered the stickers on fruit contain a rarely-viewed number that signify how the food was grown.

The four or five-digit codes divulge key information, including whether the product has been grown organically.

In the video, Joshua, 25, placed an apple, lemon and orange in a row to compare the numbers on each sticker.

According to the International Federation for Produce Standards website, Joshua’s information is correct. 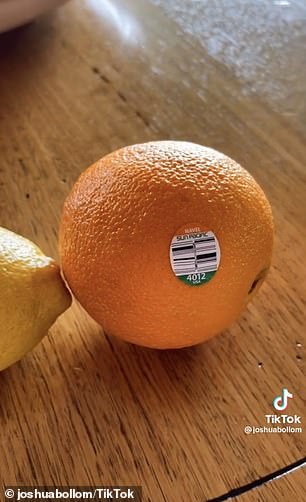 Joshua Bollom, from Sydney, (left) discovered the stickers on fruit contain a cryptic number that signify how to food was grown

‘Here’s something I learnt at the age of 25. So I’m sure a lot of you eat fruit, and whenever you buy fruit you always see these little stickers on them,’ Joshua said in the video.

‘Well these little stickers actually tell you how the fruit is grown.

‘If you look closely, you should see [these stickers] will either have a four-digit or five-digit number.’

Joshua went on to explain what each digit means, claiming four-digit numbers mean the fruit has been ‘grown in pesticides’.

What do the stickers on fruit mean?

According to International Federation for Produce Standards website, stickers containing four-digit codes beginning with a three or four signify the fruit or vegetable was made with conventional farming techniques.

A five-digit code starting with the number nine means the fruit has been grown organically.

A five-digit code starting with the number eight means food has been genetically modified.

‘I’m surprised how many people don’t believe this..I thought this was common knowledge by now,’ one person wrote.

‘It’s called PLU (price look up) number, yes it is used for those things but it’s also used as a code for checkout people to type in,’ another claimed.

Others simply thanked Joshua for sharing the handy tip.

If you want know more about what the codes mean, you can look it up on the International Federation for Produce Standards website.