Purr-fect solution! How pet lovers can see the world while their furry companions are looked after for FREE

By Harriet Sime for the Daily Mail

There was a lump in my throat as I hauled my suitcase out of the front door. I had just left my cat in the hands of a total stranger and was about to head off for a weekend break in the snowy hills of Switzerland.

The stranger was called Angela, and I had found her last-minute on a website dedicated to connecting pet-owners and pet-lovers.

What’s more, she was offering her services for free. It seemed like the perfect solution to what was becoming a repetitive headache for my fiance Dan and me.

Purr-fect solution: Harriet with pet-sitter Angela and Dewi, the cat who can open the fridge

In the past, we’ve had friends, friends of friends and relatives look after Dewi, our three-year-old Maine coon. We’ve even made the 12-hour round trip to Wales to leave him with my parents. There had to be another way.

I had been connected with Angela through TrustedHousesitters (trustedhousesitters.com) just ten days before our holiday. The website works like this: you pay an annual £89 fee and then set up your own profile, with information about your pet and your home.

You enter the dates you are away and up come dozens of smiling faces belonging to people willing to look after your pet — whatever it might be — and stay in your home.

In return, sitters are given the opportunity to be a resident, rather than a visitor, in a new location for free.

The website has thousands of members in more than 130 countries. There are several other companies that offer similar (albeit paid-for) services, including The Animal Angels (animalangels.co.uk).

Straightaway, I liked the look of Angela. She appeared friendly and had 62 glowing reviews on the TrustedHousesitters website. Once connected, we spoke on the telephone for half an hour and Skyped to give her a tour of my sister’s flat, where she would be staying with Dewi and to give Dewi a virtual introduction to his new best friend.

Our nerves were instantly settled by Angela’s warm personality and clear love of animals — throughout our call, she had a 21-year-old cat sleeping and purring on her lap.

SOME OF ANGELA’S TRAVELS

Dewi is not the easiest of cats. Shamefully, my instructions/warnings to Angela were as follows: leave all internal doors open, even when in the loo or the shower, or he will moan; feed him daily at 8am and 8pm; leave a chair in front of the fridge as he can open it; be prepared for him to share your bed. It hardly sounded like an appealing weekend.

As we were clambering on to the slopes, Angela sent us a message with a picture of Dewi and kept in touch throughout our trip with daily updates, videos and images. We felt totally assured that he was safe and happy.

We finally met Angela in person the morning we landed. The house was sparkling clean, with fresh flowers, and it was clear that she and Dewi had bonded. Angela’s love of pets has taken her and her husband far and wide.

‘It allows me to explore my three passions: pets, places and people,’ she says. ‘I did two sits in Barbados, the first with Honey, a golden labrador, who spent all her time in the pool chasing rocks.

‘We stayed in a beautiful ocean view villa in St James’s and had a vehicle so we could take Honey out exploring the island. Barbados is very expensive and staying in a home away from home is a great affordable option.’ 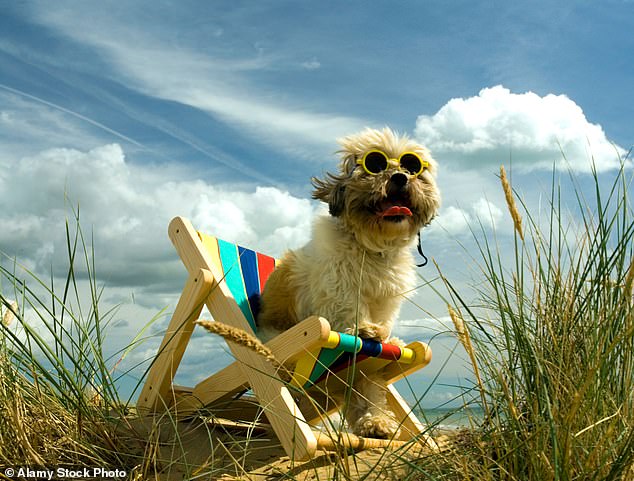 Taking it easy: Toby the Shih Tzu puts his feet up on a deckchair in Camber Sands, East Sussex

Angela adds: ‘In May, I’m going back to San Diego to look after a dog we previously looked after in New York in a nine-room apartment on Fifth Avenue that used to be owned by a member the Kennedy family.’

There’s no guarantee that every sitter will be like Angela, but would we use Trusted Housesitters again? Absolutely.

And now that I’m a signed up member, we plan to look after someone else’s pet during a holiday in Barcelona this summer. It might be a cat but, just as easily, it could be a hamster.