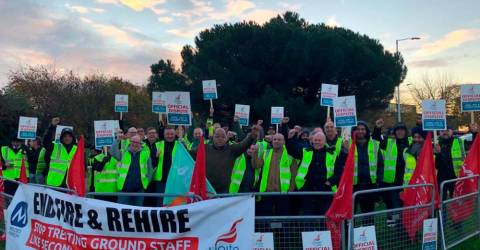 MOSCOW: London’s Heathrow airport is bracing for disruptions as 350 ground maintenance employees went on a three-day strike for higher wages on Friday, supported by Unite, one of the United Kingdom’s largest unions.

Disruptions will likely affect flights departing from terminals 2, 3 and 4, specifically those operated by American Airlines, Lufthansa, Swiss Air, Austrian Airlines, Egypt Air, Aer Lingus and Finnair, the union said. They will not affect passengers traveling to the World Cup with Qatar Airways, the union specified.

Unite said that the strike was “entirely of Menzies’ (the company operating Heathrow) own making,“ since the pay raise the company offered to its workers is “derisory” and certainly not enough to deal with “the real inflation rate of 14.2 per cent”.

Sky News reported that ground employees at Heathrow Airport had already begun the strike. It cited an airport spokesperson as saying that management knew of the strike and was already looking for solutions.

“(The airport management is) in discussions with our airline partners on what contingency plans they can implement to support their ground handling. Our priority is to ensure passengers are not disrupted by airline ground handler shortages,“ the spokesperson told Sky News.

Worker strikes have become more frequent in the UK, in parallel with soaring inflation, which reached a record 11.1 per cent in October. Ex-Prime Minister Liz Truss’ failure to curb growing prices and eliminate the budget deficit caused her to resign last month. Her successor Rishi Sunak’s government presented a mid-term financial plan on Thursday and is counting on tax hikes and cuts in public spending to stabilise the economy.-Bernama