A Texas husband donated a kidney to his wife of 51 years after she was told she needed a transplant to survive.

Peggy Nipper, 74, of Austin, was diagnosed with a genetic kidney disease, which causes cysts to grow on the organs.

Over time her kidneys began to fail, until they were functioning at just 14 percent, CNN reported.

Peggy’s condition was deteriorating to such an extent that she was told she needed a transplant or she would have to go on dialysis.

That’s when her husband and high school sweetheart, Mike, decided to get tested and, as it turns out, he was a perfect match.

Peggy Nipper, 74, of Austin, Texas, was diagnosed with polycystic kidney disease, a genetic condition that can lead to kidney failure. Pictured: Peggy, right in the hospital with her husband, Mike

‘We promised each other, in sickness and in health until death do us part, and that’s how its going to be. We’re just trying to extend that death do us part for as long as we can.’

Peggy’s condition, polycystic kidney disease (PKD), is the same one that her mother died of and that her brother is battling right now, according to CNN.

PKD is a genetic disorder that causes fluid-filled cysts to grow in the kidneys. These cysts can change the shape of the kidneys, which reduces kidney function and potentially leads to kidney failure.

According to the National Institute of Diabetes and Digestive and Kidney Diseases, 661,000 Americans are suffering from kidney failure.

There are currently more than  93,000 people on the kidney transplant waiting list with a wait taking anywhere from five to 10 years.

After finding a hospital that was willing to perform on Peggy – St David’s North Austin Medical Center – she now needed to find a match. 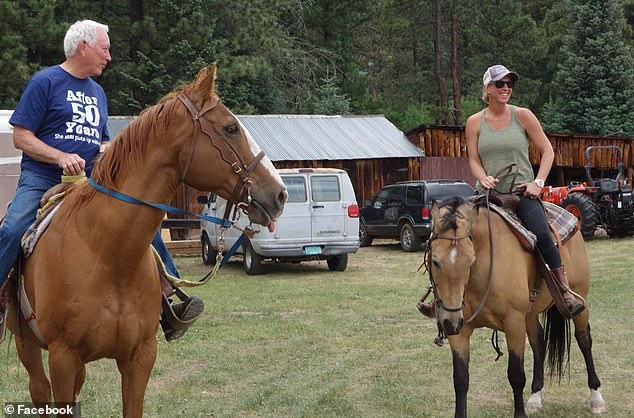 After Peggy was told she would need a transplant, her husband of 51 years, Mike, was tested and found to be a perfect match. Pictured: Mike, left, with a family member

The transplant was successfully performed at St David’s North Austin Medical Center on November 12. Pictured: Peggy, center, and Mike, second from left, with family on their 50th wedding anniversary

‘We didn’t even think there was a possibility for him to be a direct match,’ she told CNN.

‘If you carry babies from your husband, your blood has been mixed and very often you develop antigens against that blood because of bearing children. So we didn’t even know it was a possibility.’

Not only were Mike and Peggy the same blood type but they matched on the six antigens, or genetic markers, the donor and recipient share.

They underwent the transplant on November 12 and both are back at home recovering nicely.

‘It was quite a gift,’ Peggy told CNN.

‘I don’t think he has to give me another gift for the rest of my life. This was the ultimate present.’