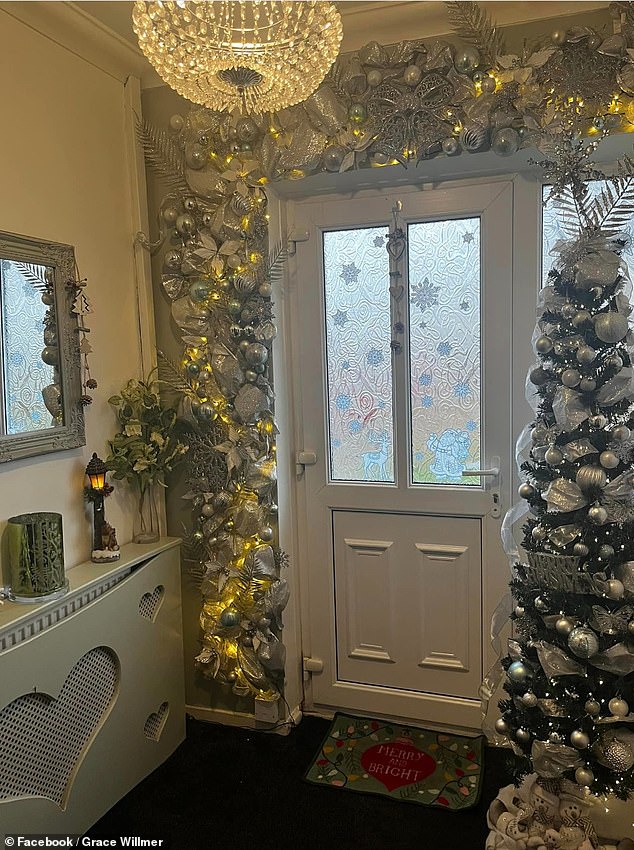 A thrifty woman who couldn’t afford a trendy £100 Christmas arch around her front door has revealed how she made a DIY alternative for only £20.

Grace Willmer, 33, from South Yorkshire, had her eye on a fake Christmas tree arch from Amazon earlier this year but couldn’t justify the eye-watering price tag.

Instead, the Customer Service Advisor decided to take inspiration from similar designs she’s seen on Pinterest and create her own version of the interior trend on a budget.

Posting on a DIY Facebook page, the Grace shared photos documenting the process before then showing off the finished result.

She wrote: ‘Started spreading some Christmas cheer! I couldn’t afford to purchase a door arch, so I made this.’

The silver-themed arch – which has fairy lights running through it -perfectly frames Grace’s front door and offsets her matching Christmas tree. 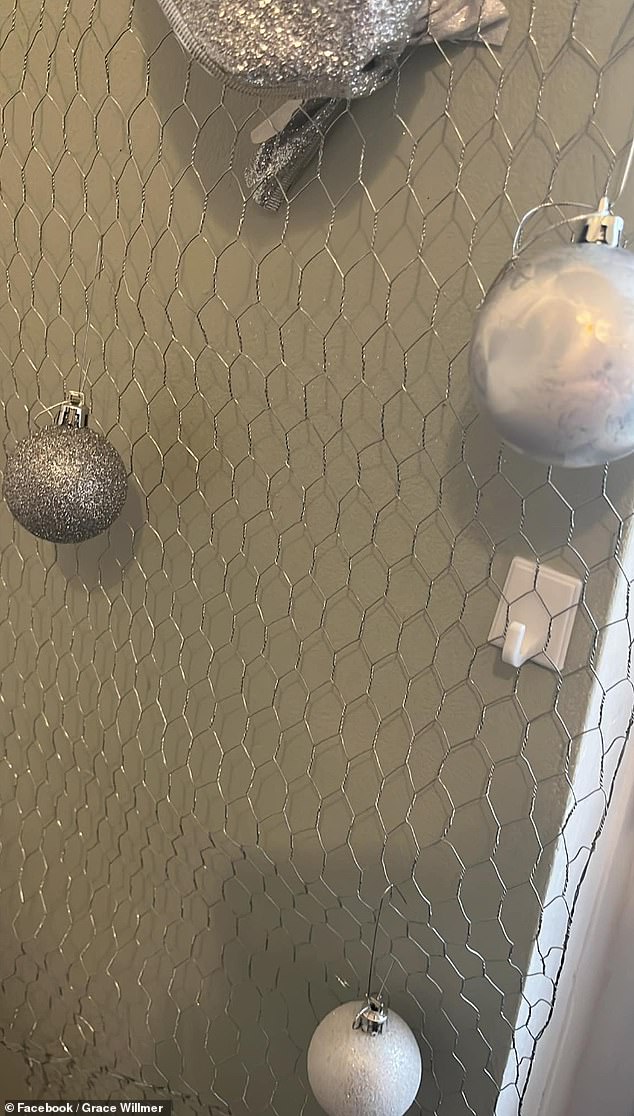 The 33-year-old, from South Yorkshire, used chicken wire (pictured) as the foundation of the arch 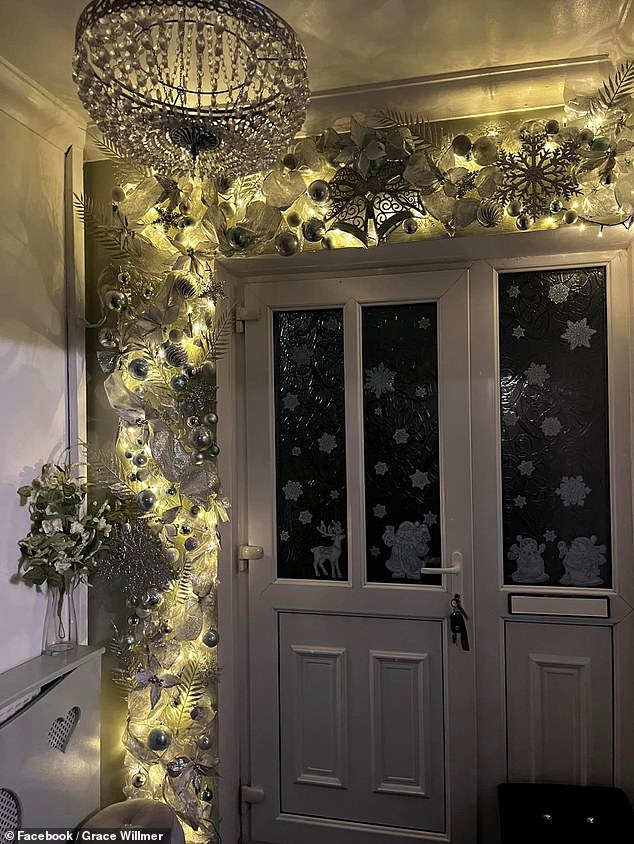 Grace lined the arch with fairylights and then used decorations she already owned. Pictured: the finished result at night

Speaking to FEMAIL, the thrifty woman explained how the £20 went towards chicken wire, plastic hooks and pliers and she used decorations she already owned to achieve the finished result.

To begin with, Grace said: ‘I cut the two pieces of chicken wire to the desired width – one vertical and one horizontal.

‘I put the sticky hooks on all corners and then smaller ones dotted around to ensure it was secure.’

Next, Grace started decorating the foundation of her arch – but now sees there was a more efficient way she could have done it. 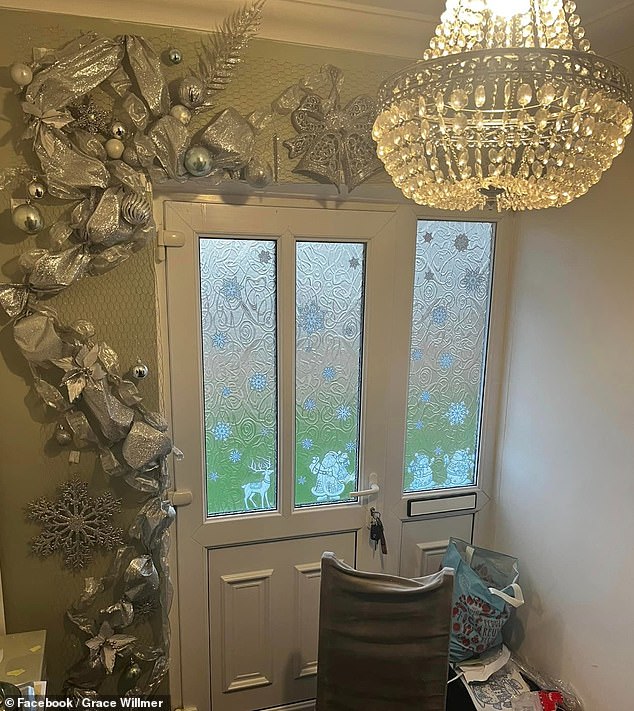 Grace shared photos on Facebook from every step of the process. In total, it took her five hours to complete 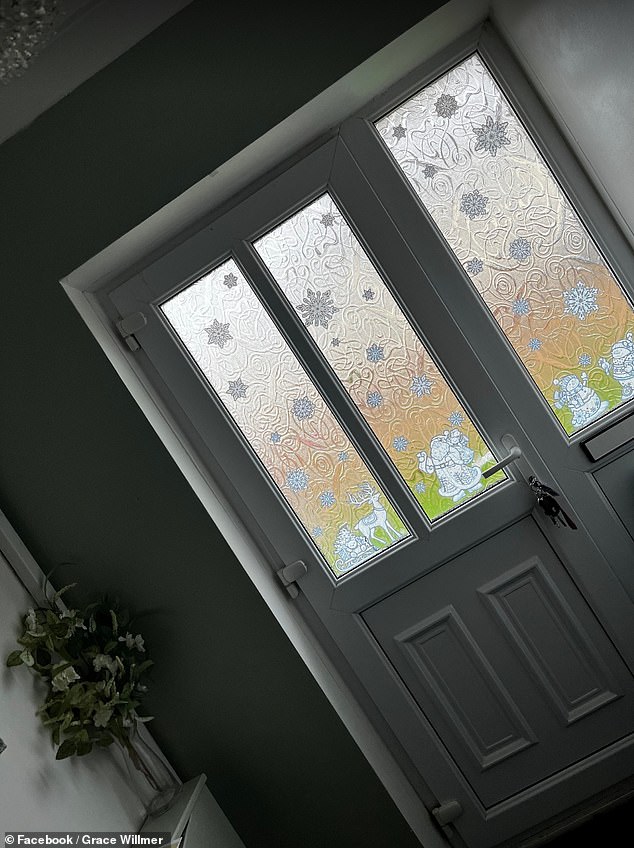 Grace shared a photo of what her doorway looked like before the transformation. She says she’ll  swap out the decorations with the changing seasons

She continued: ‘Once the wire was up, I started threading my ribbon through and tying it to the wire. Although looking back, it will probably would have been easier and saved more time to do this when the wire wasn’t on the wall.’

After she was happy with the placement of the ribbon, Grace got stuck in with the fairy lights.

She explained: ‘I then threaded my lights and started putting baubles onto decoration hooks and filled the gaps out. I have since put some nails in to strengthen it [to the wall].’

What’s more, Grace says it took her five hours to complete and she intends to keep it up all year round and swap the decorations with every season.

Her post amassed over 1,500 ‘likes’ and inspired other members of the group to give it a try too

In her post, she added:’ After Christmas, I’m going to take the baubles down and put foilage up and I will change colours depending on the time of year.

‘I’m thinking Spring pastels, summer yellows, autumn orange, Halloween red and black roses and then back to baubles [at the end of the year].’

The post has amassed over 1,500 ‘likes’ in just over 24 hours and others members of the group said they were now inspired to try it out themselves.

‘Oh wow,’ one replied. ‘That looks stunning, especially lit up at night! I love it.’

Another added: ‘This is amazing. I have the chicken wire to do this. Hope it looks as good as yours.’

‘This is an amazing idea,’ a third wrote. ‘Looks beautiful!’

‘I’m so overwhelmed with everyone’s kind comments and messages,’ Grace said. ‘I didn’t think it would get this much attention.’