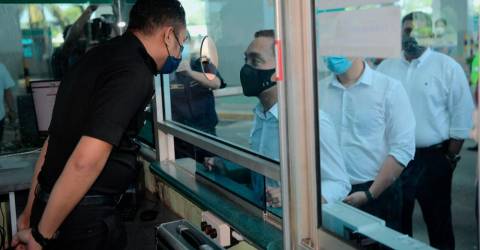 MERSING: The identity of the four foreign divers who were reported missing at Pulau Tokong Sanggol here yesterday have been identified.

“All the victims were tourists, with one of them a diving coach. It was not the first time they went diving as all of them were experienced divers and were in the process of upgrading their diving certification,“ he told a press conference at Pengkalan Hadapan Carilamat at the Mersing Jetty, here, today.

Onn Hafiz said the families of the victims had been informed of the incident and were understood to be on their way here.

On the search and rescue (SAR) operation, he said, it would continue until afternoon depending on the weather condition.

In the incident at noon yesterday, the four foreign divers were reported missing in the waters of Pulau Tokong Sanggol, about nine nautical miles from Tanjung Leman, here.

Following which, a SAR operation was mounted, but was halted at 7.30 pm yesterday due to poor visibility and resumed at 7 am today, involving a total of 90 members and officers from various agencies ,including 30 divers and 18 assets. ― Bernama