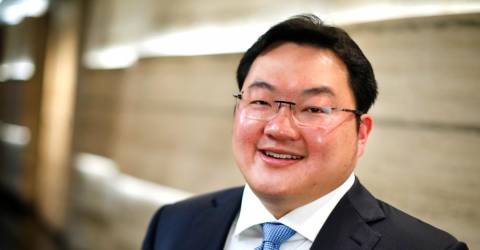 She said this during cross-examination Datuk Seri Najib Tun Razak’s lawyer Wan Aizuddin Wan Mohammed at the trial of the former prime minister over charges of embezzling 1MDB funds worth RM2.3 billion.

“I categorically say I am not his auntie, not only I’m not his auntie, I am also not in any way related to him. In fact, I first met Jho Low in 2011 after a month since I joined 1MDB. I was having lunch with 1MDB’s director Tan Sri Ong Gim Huat and Radhi Mohamad.

“I think he came in, Radhi said ‘oh, that’s Jho Low’ and Tan Sri Ong and Radhi went over to say hi. I saw him from afar. At that time, I didn’t know who he was.

“After lunch, I had asked the duo who Jho Low was because in my mind of course he had connections with the company because they both went to greet the man, but they just kept quiet,” said the 17th prosecution witness.

Wan Aizuddin: So, you were not introduced to Jho Low? She replied: “No”.

When the lawyer showed a photograph of Jho Low, the witness said she was unable to recognise the face as she had only seen him from afar.

She also said that she had never seen Jho Low after the 2011 lunch event.

To another question, the witness said she was never informed by senior management of 1MDB that Jho Low played any role in the company.