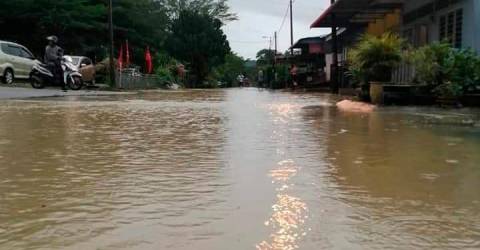 KUALA LUMPUR: The number of flood victims at relief centres (PPS) in Kelantan, Penang and Melaka rose this evening, but there is no change in Johor, and a drop in Kedah and Selangor.

In KELANTAN, 604 individuals from 182 families were placed in three PPS in the Pasir Mas and Tanah Merah districts as of 3 pm today, compared to 311 people from 94 families this morning.

Meanwhile, checks by Bernama showed that residents and traders in Rantau Panjang town, situated near the Sungai Golok, are on high alert as the river water reached 9.91 metres (m), exceeding the danger level of 9 m.

In PENANG, the number of flood victims increased to 160 people, compared to 117 this morning, placed in three PPS as of 2 pm after several areas were submerged due to flash floods following a four-hour downpour yesterday evening.

In MELAKA, the number of evacuees in the two PPS in Alor Gajah rose to 37 individuals from 11 families compared with 29 victims from 10 families at 8 am today.

In JOHOR, the total number of flood victims remains at 57 from 18 families, housed at three PPS in Segamat as of noon today.

“Another PPS in Segamat is the Dewan Komuniti Tasek, which is housing 14 victims from Kampung Seberang Batu Badak. It opened on Nov 6,” said the statement.

In KEDAH, a PPS in Kulim district was closed while the number of flood victims in Kedah has dropped to 220 people from 53 families as of noon compared to 239 people from 61 families this morning.

Apart from this, the PPS at Surau Batu 18 in Bandar Baharu district is still housing eight people from two families.

In SELANGOR, the number of victims housed in eight PPS in the Klang and Kuala Selangor districts has dropped to 803 people from 190 families compared to 890 victims from 212 families yesterday.

Based on the Selangor Disaster Management Unit statistics as of noon today, PPS Masjid Al-Falah in Kampung Budiman, Shah Alam, which was opened on Nov 10, closed today.

However, an additional PPS was opened at SJKC Yuk Chih in Bestari Jaya. It houses 43 victims from 15 families.

Apart from this, a Bernama check in Meru, Klang showed that the floodwaters there had started to recede. However, the cloudy weather is still a concern for residents.-Bernama