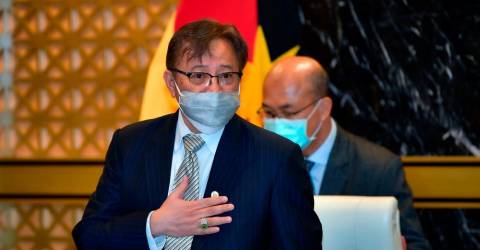 He said Safiee had served well during his term and there is no reason why he could not be renominated.

“Daro is represented by PBB, and I see that our Daro representative has worked diligently. So it would not be wrong for us to renominate him during the coming state election,” he told reporters after attending a get-together with Daro residents at the Daro community hall, here.

In his speech, Abang Johari said he believes Sarawakians want a strong GPS government to lead Sarawak to become a developed state by 2030.

Daro, he said, has witnessed significant development, including the Batang Lassa bridge project worth RM2 billion to connect the district with Sarikei and Sibu.

The state government has also identified the type of agriculture and aquaculture projects to be developed in the district.

To enable the development of the industries by the end of the 12th Malaysia Plan, infrastructure development such as roads, bridges, electricity and water supply must be implemented.

“This can be done not because of me, but because of the support you have given PBB and also Gabungan Parti Sarawak,“ he said while urging Daro voters to remain united and to keep supporting the party.

Abang Johari had earlier attended the official opening of the Al-Muhsiniin Mosque by Sarawak Yang Dipertua Negeri Tun Abdul Taib Mahmud and performed Friday prayers at the mosque together with local residents.

He then officiated the groundbreaking ceremony for Bandar Baru Daro Phase 2 and the launch of the Daro food ourt.