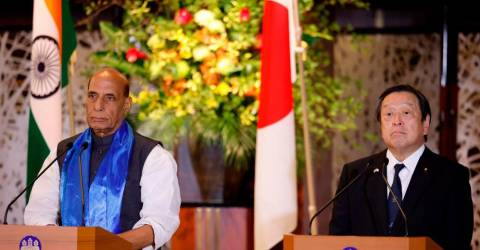 INDIA and Japan will deepen cooperation on defence, with India inviting investment by Japanese companies and plans for joint military exercises involving their air forces, the two sides said on Thursday.

“The two ministers agreed that the early conduct of the inaugural fighter exercise will pave the way for much greater cooperation and interoperability between the air forces of the two countries.”

India, like Japan, is bolstering its military to tackle what it sees as increased security threats. Both countries are increasingly wary of China’s growing military might and assertiveness.

Japanese Prime Minister Fumio Kishida has promised a “substantial” increase in defence spending. His ruling Liberal Democratic Party wants to double Japan’s military budget to 2% of gross domestic product over the next five years amid worry that Russia’s invasion of Ukraine could embolden China to act against the self-ruled island of Taiwan.

Japanese Foreign Minister Yoshimasa Hayashi told a joint news conference following the two-plus-two meeting that both sides denounced the use of force in settling disputes.

“We concurred that unilateral change to the status quo with force should not be tolerated in any region,“ Hayashi said.

China claims almost all the energy-rich waters of the South China Sea, where it has established military outposts on artificial islands. In the East China Sea, China claims a group of uninhabited Japanese-administered islets.

India, which last week commissioned its first home-built aircraft carrier, is involed in a standoff with Chinese forces on their remote Himalayan border.

“We confirmed that defence and security cooperation between Japan and India was expanding drastically, and agreed to keep on conducting bilateral and multilateral joint drills,“ Hayashi said.

Japan and India, along with Australia and the United States, are members of the Quad group of countries that hold annual naval exercises across the Indo-Pacific region to demonstrate interoperability.

The last meeting of Quad leaders, in May in Japan, was dominated by discussion about Taiwan after U.S. President Joe Biden angered China by saying he would be willing to use force to defend the democratic island. As they met, Russian and Chinese warplanes conducted a joint patrol in the region.

Kishida and India’s Prime Minister Narendra Modi in a separate bilateral meeting agreed at that time to work closely together to promote a “free and open Indo-Pacific”. – Reuters