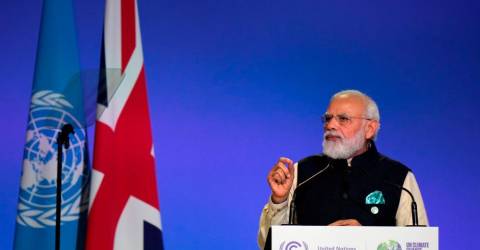 NEW DELHI: India has set a target of “net zero” carbon emissions by 2070 as part of world efforts to fight global warming.

It was one of five pledges made by Indian Prime Minister Narendra Modi while speaking at the United Nations climate summit in Glasgow, Britain, on Monday.

The other goals of the world’s number three emitter of greenhouse gases after China and the United States include raising its non-fossil energy capacity to 500 gigawatt and fulfilling 50 percent of its power requirements from renewable sources by 2030.

Modi said India will cut by one billion tonnes its total projected carbon emissions between now and 2030 and reduce the economy’s carbon intensity to less than 45 percent during the same period.

The Indian leader pointed out that international financial promises to fight climate change have not been kept and asked developed countries to offer more climate finance.

“India expects developed countries to provide climate finance of US$1 trillion at the earliest. Today it is necessary that as we track the progress made in climate mitigation, we should also track climate finance,“ Modi said. — Bernama