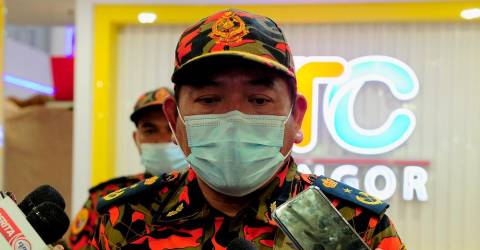 CYBERJAYA: It was a nerve wrecking ordeal for an Indonesian worker when half of his body was buried in a landslide incident at Laman View here this afternoon.

Selangor Fire and Rescue Department (JBPM) director Norazam Khamis (pix) said at the time of the incident, the victim, Samsul Maarif, 43, was carrying out pipe repair work in a 3.04-metre (10 feet) deep hole.

“During the excavation works, all of a sudden the soil collapsed and covered part of the man’s body from the waist down,“ he said in a statement here today.

Norazam said a JBPM rescue team arrived at the location at about 2.16 pm to find the victim has already been rescued by co-workers at the scene.

He added that the victim who suffered injuries and was bleeding in the mouth was given first aid by the Emergency Medical Retrieval Service (EMRS) at the location and later sent to Putrajaya Hospital for further treatment. — Bernama