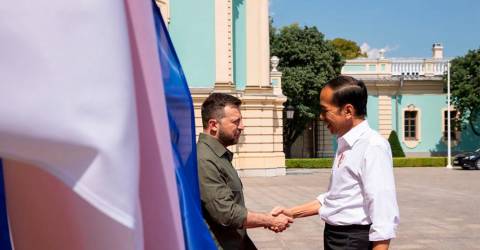 JAKARTA: Indonesian President Joko Widodo has offered to take a message from Ukrainian President Volodymyr Zelenskyy to Russia’s leader in an effort to mediate peace.

Joko Widodo who is on a working visit to Ukraine, held a meeting with Zelenskyy at the latter’s Maryinsky Palace in Kyiv at 3 pm Ukraine time on Wednesday, according to the Indonesian presidential office’s statement.

The president, also known as Jokowi, reaffirmed Indonesia’s position on respecting the sovereignty and territorial integrity of provinces, while speaking at a joint press conference with Zelenskyy.

Even though it’s very hard to achieve, Jokowi expressed the importance of a peace resolution, saying that the spirit of peace must never fade.

“I offered to deliver a message from President Zelenskyy to President (Vladimir) Putin, whom I’ll meet soon,“ the statement read.

Jokowi together with first lady Iriana Joko Widodo and their entourage, including Foreign Minister Retno Marsudi returned to Poland shortly after the meeting.

The president and the delegation was due to depart Thursday for Moscow to continue with his peace mission.-Bernama