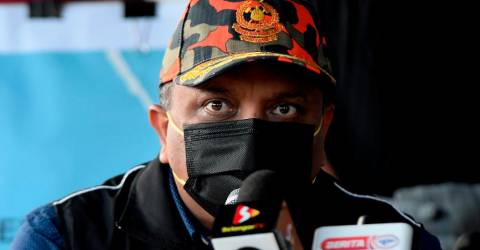 SHAH ALAM: The Housing and Local Government Ministry (KPKT) has provided an initial allocation of RM50 million to 51 local authorities in flood-hit areas throughout the country to undertake repairs of public amenities.

Its minister, Datuk Seri Reezal Merican Naina Merican (pix), said this allocation would increase as the floods in certain states had not fully subsided.

“This early allocation of RM50 million is specially for repairing public infrastructure but I wouldn’t say this figure is static. Some states have not recovered yet, including Segamat in Johor where there are still stagnant waters.

“So they (local authorities) will have to come to us on the planning they need to do. But in terms of long-term planning for bigger projects on irrigation and the like, there need to be discussions between the state governments and the Environment and Water Ministry,” he said.

Reezal Merican said his ministry would hold a joint press conference with the Rural Development Ministry next week to give details on the total amount needed to repair and build new houses.

He said besides search and rescue work by the Fire and Rescue Department, the ministry was also involved in post-flood operations, adding that SWCorp in Selangor had managed more than 77,000 tonnes of garbage in Pahang, Negeri Sembilan, Kuala Lumpur, Melaka and Selangor as at Jan 7.

He said an additional allocation of RM12.5 million had been provided by the ministry for solid waste management and public clean-up works in flood-affected states, including more than RM5 million in Selangor.