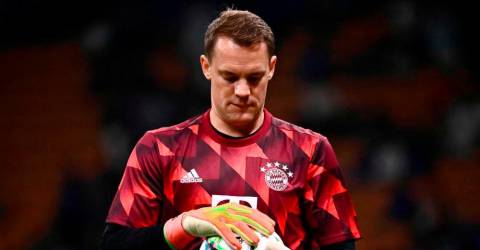 Sommer, 34, officially signed with Bayern from Borussia Moenchengladbach on Thursday and played his first game on Friday, where his side drew 1-1 away against RB Leipzig.

“Yann had a good game, it’s not an easy situation. Manu is our captain and a world-class player,“ Nagelsmann said at the post-match press conference.

“To come in after such a short (preparation) time isn’t easy.”

He added: “Manuel is our captain and our number one. We’re doing everything we can to get him healthy, and then we assume he’ll be back in the summer.

“What happens then, we will clarify in the summer.”

Neuer broke his leg while skiing in December and will miss the remainder of the season, although some reports have suggested the injury could rule him out for the calendar year.

Sommer is first choice for Switzerland, is widely regarded as one of the best goalkeepers in Europe and is two years younger than Neuer.

His contract runs until the summer of 2025, one year longer than Neuer’s, giving rise to suspicions he may replace the 2014 World Cup winner between the sticks.

Sommer said after the match he was looking forward to settling in at the side, after a “hectic” few days.

“The routines weren’t perfect yet of course, but it was fun.

“I thought it was pretty good, but with the ball you sometimes don’t know how the players run. We will work on that in training. I’m looking forward to a calmer day and then it’s off to the first home game.”