A cartel sicario who was recruited as a teen and killed more than 100 people by the time he was 22 has spoken out anonymously to tell how he escaped crime through the help of Mexican police but is now running for his life after their protection stopped.

The unnamed man spoke to The New York Times in an effort to tell the world about the reality of life in Mexico.

He explained how, at 17, he mutilated a corpse as part of his training for the Guerreros Unidos then went on to kill hundreds by the time he was a young man, eventually being recruited to work for Los Rojos.

He had decided to enter a life of crime after growing up poor which, he said, left him humiliated. He earned only a dollar or so a day doing labor work but, as a sicario, could earn hundreds a week.

In 2017, was eventually picked up by police but instead of being put behind bars, they struck an unofficial agreement with him.

It was unsanctioned by the government so there was no paperwork in place but it involved him snitching on the cartel in exchange for his freedom.

A federal police officer in Guanajuato, Mexico, on December 11 after a cartel attack on a police station

For several years, it worked seamlessly and he even recruited others to join him.

I wanted to be a psychopath, to kill without mercy and be the most feared sicario in the world

However when the program fell apart, he was left to fend for himself.

He is now on the run, in fear of his life. The cartel has already murdered his brother, who was a member of the military, as an act of revenge.

‘This is the way things work in Mexico. And I want the world to see it,’ the man said.

When he joined the cartel before his 18th birthday, he said he was determined not just to fit in, but to excel.

‘I wanted to be a psychopath, to kill without mercy and be the most feared sicario in the world,’ he said.

Over the years, he said the gang ‘took away everything that was human’ and turned him into a ‘monster’.

‘They turned me into an animal…I blocked myself, my own emotions, and told myself it was someone else doing it,’ he said, explaining how he once slit the throat of a boy next to him without warning or reason purely to prove how tough he was.

For five years, he worked as a hitman to fight off rival cartel members and secure his gang’s drug trade.

He still haunts me… I see his face, that kid, begging me for his life

Only a few of the more than 100 murders he committed haunt him, he said, including the killing of an innocent student who happened to be with a gang of kidnappers he was sent to assassinate.

‘That student still haunts me. I see his face, that kid begging me for his life. I will never forget his eyes.

‘He was the only one who ever looked at me that way,’ he said, adding that he had called his boss asking if he could let the student go but was told no.

He was turned in by one of his partners who promised him up to save himself.

The police could have put him behind bars for 200 years but instead, Albert Capella, the police chief in the state of Morelos, decided to launch an experimental informant program. 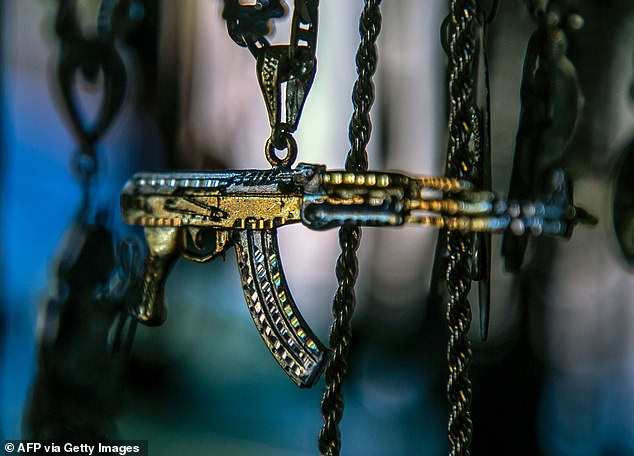 An AK-47 pendant for sale at a market in Mexico. The sicario said he wanted to tell his story to show the world what life in Mexico was like

He said he had become so desperate to solve the escalating crime in the region that he did not care if it was unorthodox, let alone unsanctioned.

‘We had to try something. We couldn’t just sit there and do nothing.

‘It’s something few have dared to do but it is worth the risk,’ he said. 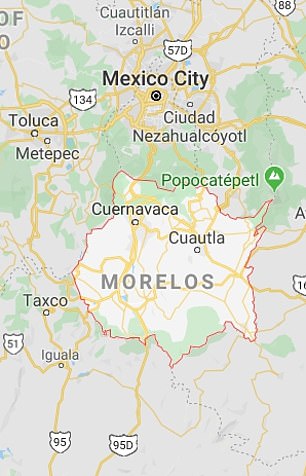 The sicario struck his deal with police in Morelos, a small state in the southern part of Mexico

The sicario was so valuable that the information he gave the chief led to 100 convictions.

While crime across the country soared, it started to decrease in Morelos, thanks in part to the program.

However, when Capella was given the more prestigious posting of police chief in the state of Quintana Roo – a tourist mecca – the program fell apart.

Because it was unofficial, there was no structure in place to keep it going and none of the other police chiefs wanted to be involved.

It disintegrated in early 2019.

Some of the other cartel members who had been recruited as part of it returned to a life of crime. They had been sleeping in a jail-like set-up, which was next to the local jail – and were ferried to and from court to testify in cartel cases.

But when the program shut down, it all disappeared.

The sicario fled after the summer. His brother was killed not long afterwards at their parents’ taco stand.

He thinks that they may have intended to kill him but because they look so similar, gotten them confused.

Now, he is on the run. He sometimes sees his young son.