300,000 ‘locked-in’ investors are told they’ve lost a fifth of their money as Neil Woodford’s name is erased from multi-billion-pound fund he managed after spectacular fall from grace

By Ed Riley For Mailonline

Investors locked into disgraced financier Neil Woodford’s collapsed flagship fund have been told they have lost nearly a fifth of their money.

Up to 300,000 investors – many of whom used their life savings – are facing huge losses after administrator Link Asset Services said the value of the fund had fallen by almost 19 per cent.

The Woodford Equity Income Fund, which has been suspended for nearly six months, will be wound up from January 18, Link said. It said that on January 20, investors will begin to start getting their money back.

And the Woodford name, once one of the stars of the investment industry, will also be immediately erased from the multibillion-pound equity income fund he managed until it was suspended in June.

Link revealed yesterday that BlackRock, the US investment bank selling off the fund’s assets, has raised £1.65 billion by selling 56 per cent of the fund since it took on the task last month. More money will come as the assets are sold up while the fund winds up.

Link said that since the fund was was suspended on June 3, the fund has lost 18.6 per cent of its value, compared with the 4.1 per cent gain that investors would have made if their money was tracking the FTSE All Share index.

A former darling of the City, Neil Woodford fell from grace earlier this year when he was forced to suspend his fund – once worth more than £10billion – after investors tried to cash out too quickly.

The fund had invested in assets that were difficult to sell off quickly, making it vulnerable when investors tried to withdraw their cash. 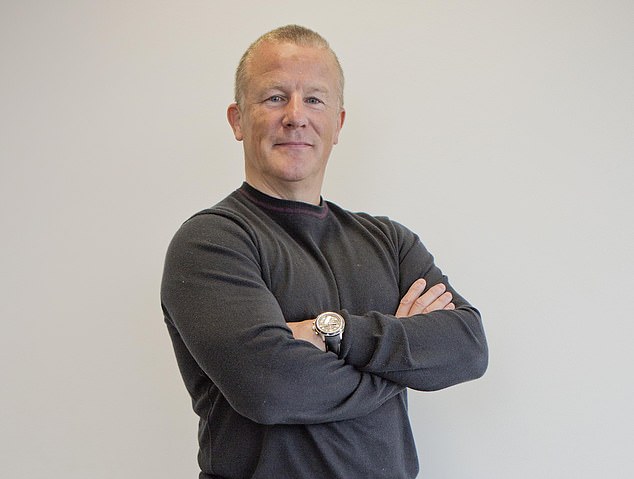 The Woodford name, once one of the stars of the investment industry, will also be immediately erased from the multibillion-pound equity income fund he managed until it was suspended in June. Pictured: Neil Woodford

Ryan Hughes, head of active portfolios at investment platform AJ Bell, said: ‘The latest letter to investors at least gives them a date when they can expect the first return of their money, with the payment being made on 20th January

‘The valuation now represents a near 19 per cent loss for investors since the fund gated at the start of June, and the fund has delivered a 3.2 per cent loss since the 15th October, as Link wrote down the value of some of the unlisted assets.

‘While the initial liquid assets have been sold, now the hard word begins.’

BlackRock has focused on one part of the fund, known as Portfolio A. Link said it had sold 79 per cent of the shares in the Woodford fund, achieving a total sale price of £1.65bn.

The remaining 21 per cent of the shares, and the ‘unlisted’ holdings, which are investments in companies not quoted on the stock market, are worth a further £1.3bn, and the administrators have run into trouble selling them.

The second part of the fund, Portfolio B, is invested in much more illiquid assets, that are difficult to sell. This task has fallen to specialists at Park Hill.

The FCA has also approved plans to change the fund’s name to LF Equity Income Fund after Neil Woodford stepped down from managing it.

There is widespread anger over Woodford’s management of the fund, and his decision to take some £8.6million in fees between its suspension in June and the decision to wind it up.

Hundred of investors are understood to be considering legal action against online investment broker Hargreaves Lansdown, which has been heavily criticised for keeping the Woodford fund on its ‘best buy’ lists up until its suspension in June.