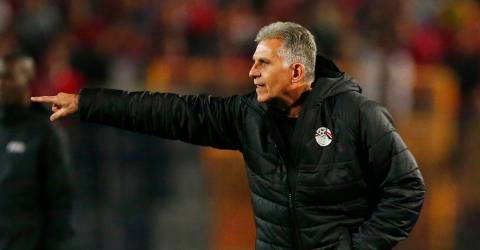 CARLOS Queiroz will lead Iran to November’s World Cup finals after the country’s football federation confirmed on Wednesday that the Portuguese would return to take charge of the team in Qatar.

The former Real Madrid coach replaces Croatia’s Dragan Skocic, who qualified the Iranians for the finals and won 15 out of 18 games during his time in charge.

“Based on the decision of the Football Federation’s Executive Board, Carlos Queiroz will be the head coach of Iran’s national football team in the Qatar World Cup.”

A source at the Iranian federation confirmed Queiroz’s appointment to Reuters.

Iran have been drawn in Group B to face England, the United States and Wales at the World Cup.

Queiroz, who has worked extensively around the world and had two spells as Alex Ferguson’s assistant at Manchester United, is expected to arrive in Iran later this week and will be leading Iran to the World Cup for the third time.

Queiroz was in charge when the Iranians qualified for the 2014 World Cup in Brazil and stayed on in the role to lead the country in Russia four years later.

Iran posted their best performance at the World Cup in 2018, winning against Morocco and drawing with Portugal to narrowly miss out on a place in the knockout rounds.

Queiroz remained in charge until the 2019 Asian Cup finals, where Iran were knocked out of the competition in the semi-finals by Japan.

He resigned from the post soon after and went on to work with the national teams of Colombia and Egypt. He parted company with the Egyptians after failing to qualify for the World Cup.

Queiroz will be making his fourth coaching appearance at the World Cup having also led his native Portugal at the 2010 tournament in South Africa.

He also qualified South Africa for the 2002 finals but resigned before the tournament. – Reuters