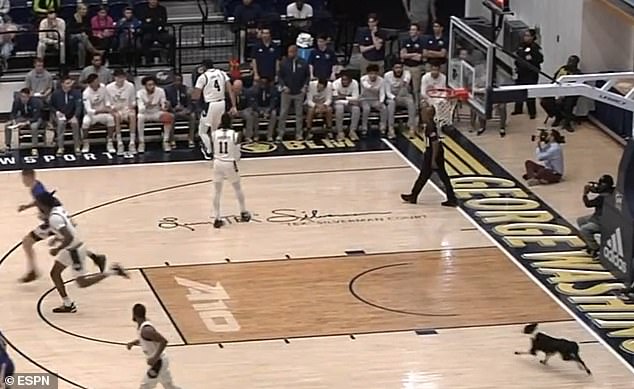 A men’s basketball game between George Washington and American University on Saturday was interrupted by an overeager halftime performer: A frisbee-catching dog named Lucky.

The incident went down early in the first half at GW’s gym in the nation’s capital when Colonials forward Ricky Lindo Jr. attempted to inbounds the ball near his team’s bench.

It was then that Lucky, a border collie, introduced herself to the crowd by sprinting onto the court and giving Lindo a brief scare.

A men’s basketball game between George Washington and American University on Saturday was interrupted by an overeager halftime performer: A frisbee-catching dog named Lucky

‘A border collie is running around the Smith Center,’ exclaimed one announcer after Lindo was visibly shaken by the surprise canine cameo.

Not wanting to steal the show entirely, Lucky returned to the sideline and refused to re-emerge until halftime, when she easily caught some frisbees to the delight of the crowd.

As for the game, Lucky was anything but for the Colonials, who lost 69-64 as Johnny O’Neil scored 19 points off of the bench for American.

It was the seventh victory in a row for the Eagles.

O’Neil scored eight points in the first half for American, who led 30-24 at the break. O’Neil led the way with 11 second-half points. 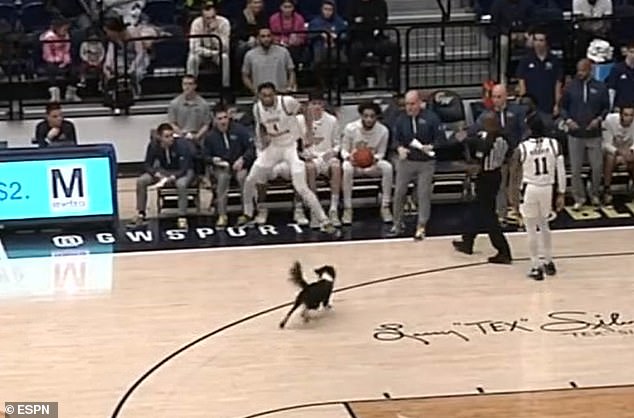