If you’re like us you’ll have been busy putting together your new spring wardrobe for weeks already and with each tiny glimpse of sun, breaking out your new season looks. Even if it’s not quite warm enough yet… Fashion waits for no one am I right?

But, without wishing to make sweeping generalisations, it’s likely the man in your life hasn’t updated his clothes since last spring came around. Or scratch that, possibly even the spring before.

So if you’re tired of seeing him in the same old jeans and T-shirt, why not give him a little style upgrade?

Men’s Fashion Week is becoming bigger and bigger and there are loads of menswear trends from the runways that can be translated easily into the wardrobes of our favourite gents.

Here are just a few ways you can update his look this season.

Much like on the womenswear catwalks, denim was everywhere for spring and summer 2019.

But instead of just wearing a pair of jeans and leaving it there, get him to try rocking a top-to-toe outfit instead.

Layering a denim jacket over a T-shirt or hoodie, as well as wearing jeans is not only acceptable now but thanks to the fashion gods, it’s a bona fide ‘thing’.

Streetwear has ruled the menswear runways for the last few years. We can thank designers like Virgil Abloh, Raf Simons and Demna Gvasalia for the fact that joggers, trainers, sweatshirts, hoodies and puffer jackets have become a major part of everyone’s look.

But behold the streetwear backlash.

Men are being encouraged to smarten up, get back to tailoring and take a more polished approach to their clothes this season.

Encourage your gentleman friend to wear a blazer with their jeans as a starting point, or if he’s very attached to his comfy clothes then suggest he wears a T-shirt, hoodie or sweatshirt under his suit.

There’s no need for him to go full business-mode. No shirts or ties required. This is more about an elegant, slightly langorous aesthetic.

A man doesn’t actually need to be a Handy Andy to want to look like he could decorate the spare room in a day or survive in the wild for weeks like Bear Grylls, so luckily for all those wannabes out there, SS19 sees the utility trend back again.

The distinguishing feature of utility is a lot of pockets. Pockets on trousers, pockets on jackets, pockets on gilets. You know, just lots and lots of pockets to store useful bushman style tools.

Or that’s the look at any rate. Acne Studios sent a full on boilersuit down its catwalk but if that’s a bit too ‘fashion’ then how about DSquared2’s military inspired camouflage print?

This won’t be a hard sell to your fella because it’s a trend that’s not only laid back but masculine too. So slip a pair of combat pants into his cupboard to make a change from his chinos.

When the weather warms up us women get to stay cool in a whole range of styles, with dresses, skirts, shorts and camisole tops all at our disposal.

So pity the poor man who can only really chill out in a pair of shorts which are not often welcome at the office. But this spring shorts are getting an overhaul and they’re not only casual but work appropriate too.

There’s just one thing they need to be. Short.

We’re fans of a baggy surfer short as much as anyone else but if you want your man to be up to date then he should be looking to show a bit more leg and choose a more tailored cut.

For inspiration look to the collections of Kenzo, Daks, Fendi and Hermes where you’ll find block colour as well as printed shorts that will be sure to keep him sharp.

Prints to make the girls wink

We’re all beyond au fait with prints of all kinds. Animal, floral, polka dots and checks all hang happily together in our wardrobes. But a lot of men are slightly out of their comfort zone with anything that isn’t just a block of navy.

So let’s get them feeling a bit more adventurous.

And there are plenty of examples of how to wear patterns on the menswear runways.

There was an explosion of prints at Dolce & Gabbana where you couldn’t move for graphics, flowers, camo, logos, tiles and even full looks emblazoned with motifs of penne pasta and cannolis…

Balenciaga, Balmain, Dior Homme and Ermenegildo Zegna were just some of the labels giving men the permission to be as bold and experimental as they like.

If he’s not one for standing out in the crowd, start him off small with a checked shirt or graphic print tee.

But if he doesn’t ever want to wear a shirt and matching trousers printed with pasta shapes, well, we think that’s okay… 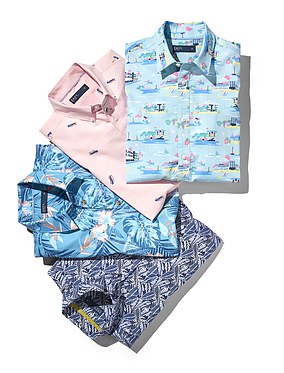 He can start his prints clash-up with Matalan’s whole range of Hawaiian shirts. 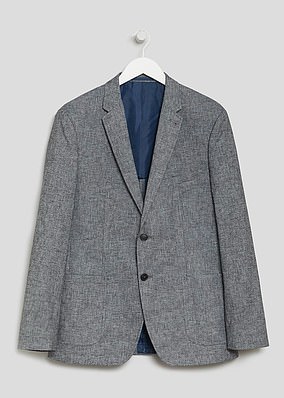 A blazer will smarten him up even if he just wears it over a T-shirt and jeans. 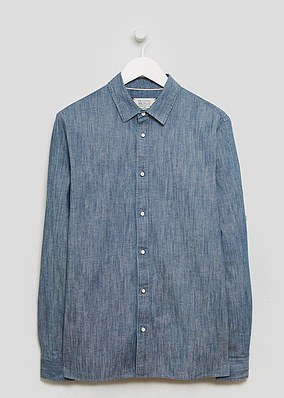 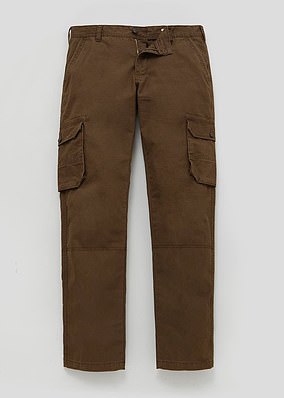 Pockets are all it takes to get the utility trend right so a pair of cargo pants is a new wardrobe essential for any stylish gent.