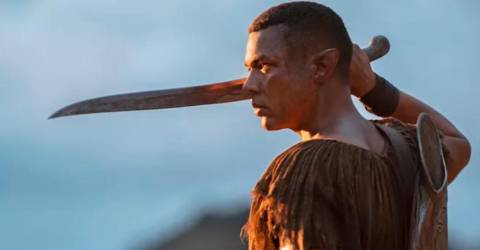 DESPITE being initially rejected for the role, Ismael Cruz Córdova’s perseverance finally paid off when he was cast as the first Latino elf in the upcoming Lord of the Rings prequel, The Rings of Power.

After seven long months of auditions, he screamed for joy in the streets of New York City after landing the historic role that he’s always dreamt of playing.

As a boy who grew up in a small mountain town in Puerto Rico, Córdova told TIME: “I didn’t see myself represented. And when I said, ‘I want to be an elf,’ people said, ‘Elves don’t look like you. When I heard about the character on the show, it felt like a mission.”

The upcoming prequel was shrouded in mystery, so much so that the 35-year-old was only told that he’d be playing an “Aragorn-type man.”

“They flew me out to New Zealand, and the night before my final read, they told me, ‘Actually, you’re playing an elf,’” he said. “It started to make sense because I was like, ‘Why does this man love trees so much?’”

With Córdova’s casting, Rings of Power is notably more inclusive with more diversity in both race and gender, challenging the way that J.R.R. Tolkien’s books were originally written.

When superfans criticised the casting for straying from the original characters, producer Lindsey Weber replied: “We’re all up for criticism, not racism.”

The Lord of the Rings: The Rings of Power will be premiering Sept 2 on Prime Video.