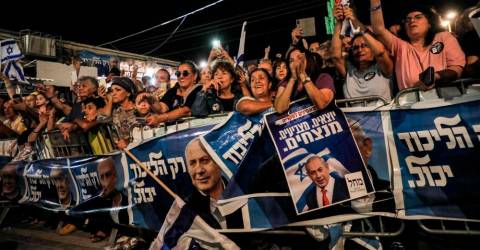 JERUSALEM: With her tattooed arms bare and her head uncovered, Talia looks somewhat out of place shopping at a Jerusalem discount supermarket that caters to modestly dressed ultra-Orthodox Jews.

“I have no choice but to come here,“ the 32-year-old nurse told AFP, asking not to be fully named as she discusses her family’s financial struggles at a time food prices are surging in Israel.

She worries about being able to feed her two children even though she and her husband, who repairs household appliances, “work like crazy”, including night shifts for her and weekend jobs for him.

“We can’t do it anymore,“ she said in frustration as she filled her cart with packets of pasta while avoiding the pricier items.

It’s a familiar problem for millions of Israelis who have endured soaring consumer prices for years, failing to fully benefit from an era of rapid economic growth driven by a high-tech boom.

Much of the world has endured rapid inflation since Russia’s war in Ukraine started early this year, driving up energy and food prices everywhere.

But in Israel — where 400 grammes of canned tuna can each cost around 30 shekels (about $8.50) — the problem has been acute for years, blamed in part on the strong shekel which makes imports more expensive.

Tel Aviv, with its soaring property prices, was ranked the world’s most expensive city by The Economist magazine last year, and simmering rage over costs and income inequality is especially widespread.

Israel, with its turbulent politics, heads back to the polls next Tuesday, for the fifth general election in less than four years.

Historically, Israeli voting patterns have been shaped by religious and ethnic affiliation and, most importantly, views on the Palestinian conflict.

But this time, ahead of the November 1 vote, the cost-of-living crisis has become a major issue for the candidates, including Prime Minister Yair Lapid and opposition leader Benjamin Netanyahu.

Both have promised action to redress the problem as inflation hit a decade-high this month of 4.6 percent year-on-year according to the Central Bureau of Statistics, though without offering too many specifics.

Rami Levy, the owner of a popular supermarket chain that bills itself as low-cost, told AFP that his sales are up 15 percent over the past year as middle class earners have increasingly sought cheaper food.

“With prices rising, people who used to be able to afford to shop closer to home are coming to us because they know it’s cheaper,“ said Levy, whose chain of eponymous stores are spread across Israel and West Bank settlements.

One Rami Levy shopper was Ayelet Benshoshan, who strolled the aisles beneath bold coloured signs offering discounts on cucumbers, meat and canned tuna.

“We have always been careful, but now there are things that we have simply stopped buying,“ she said, explaining that she has cut out “candy, crackers, cream desserts and certain cornflakes at more than 20 shekels (about $6) a packet”.

With five children at home, she said she and her husband, a maintenance worker, are “hardly” coping.

“I’m making more and more things at home, especially bread and cakes, to avoid buying them.”

Aron Troen, who teaches at the Hebrew University of Jerusalem’s School of Public Health, stressed that even middle class families are facing food security pressures and that healthy eating has become less affordable.

“When there is rapid inflation in food prices and wages don’t keep pace, the middle class have to spend more, not only on food but on rent, transportation, gas and education,“ he told AFP.

He noted that many families face “difficulty getting healthy food… People start by changing what they eat, then the quality of what they eat and then they start skipping meals or only feeding their children.”

Israel’s social security agency estimates that in 2021 more than 20 percent of the population was food insecure, a term the UN defines as lacking regular access to safe and nutritious food.

Only days before the election, Benshoshan voiced hope that politicians would make middle class hardships a focus in future.

“I would like them to think of us, ordinary citizens, who work hard and whose salaries have not increased, who have children, who pay our taxes, who have done our civil or military service,“ she said.

“We deserve an easier life… We are the middle class that is really starting to fall apart. I hope they will listen to us.” – AFP