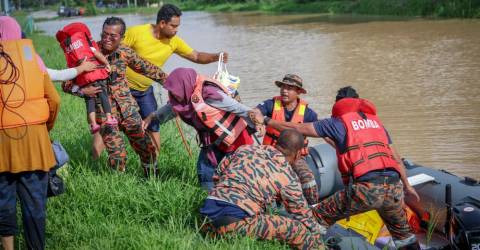 DENGKIL: ‘We were trapped, as though on an island, we couldn’t get out because all the roads were flooded,‘ said a flood victim in Kampung Sri Tanjung here.

Asiah Ismail, 50, who was rescued in a boat by firemen said the continuous heavy rain since Wednesday had caused the water to rise sharply in the village.

“I woke up at 4 am because the neighbors informed me that the water had started to rise, my husband and I then packed up our important things to put them in a safer place.

“When we wanted to leave, all the routes had been flooded (by then) and we waited for the firemen to get us evacuated,“ she said when met by reporters in Kampung Sri Tanjung here yesterday.

Checks by Bernama at the village found several houses and cars submerged in water, and residents were also seen using boats and walking to collect necessities from their respective homes.

“We are continuously monitoring the situation and Alhamdulillah, the weather conditions are improving and hopefully the water will recede quickly.

“The affected bund in Kampung Seri Tanjung has also been repaired by the Irrigation and Drainage Department,“ he said.

Saifuddin said as of 5 pm, a total of 120 families in Dengkil had been evacuated and placed in several relief centres including the Dengkil Community Hall.

“We have made early preparations to face the floods this time and have been assisted by the police, the Civil Defence Force and others,“ he said.

When met by reporters, Anuar said BN would help evacuate flood victims who were trapped. – Bernama