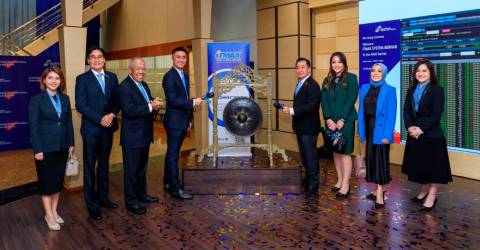 KUALA LUMPUR: ITMAX System Bhd made a strong debut on Dec 13 on the Main Market of Bursa Malaysia at RM1.52, for a premium of 45 sen over its issue price of RM1.07.

“The funds we raised will be used to fuel our commitment to continue developing and building smart cities. We will also expand our telecommunication and data systems infrastructure to ensure that we have a solid foundation to support our systems,” said managing director and CEO William Tan Wei Lun.

A further RM39.5 million has been allocated towards the network and telecommunication infrastructure expansion and RM29.08 million for working capital while RM8 million will be for the repayment of borrowings.

On its expansion plan, Tan said the company is planning to focus on its resources to expand its business to other states in Malaysia by introducing cameras and related accessories to the market.

“We provide a video surveillance by generating statistics and reports utilising artificial intelligence. We target to bring the system in all major cities in Malaysia. This is crucial, especially since video surveillance in most of the cities has less than 100 camera.

“To cover more blind-spots, it is ideally to have around 50,000 camera in the city. We will take some time but I think it is achievable in 10 years’ time,” he said.