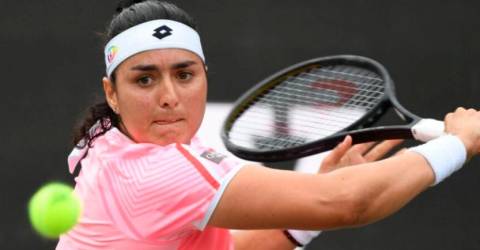 SYDNEY: Tunisian Ons Jabeur (pix) got past Petra Kvitova 6-4, 6-4 at the Sydney Tennis Classic on Wednesday for her first win over the two-times Wimbledon champion in four meetings, while Spain’s Garbine Muguruza also reached the quarterfinals.

World No. 10 Jabeur, whose most recent defeat to Kvitova came at Cincinnati in August, fought back from a break down in both sets to prevail on Ken Rosewall Arena.

Czech Kvitova heads to next week’s Australian Open hoping to improve on her runner-up finish in 2019 and while she showed glimpses of the power game that can overwhelm opponents she was broken five times by Jabeur.

“Finally, after so many losses against her,” seventh seed Jabeur told reporters. “It’s not easy to return those powerful shots, but I’ve been prepared and I really wanted to win. So I went for it.

“I learned from my losses against her, especially the last one in Cincinnati. To be honest, I’m glad that the court wasn’t super fast. It kind of helped me a little bit.”

Up next for Jabeur is Anett Kontaveit, who beat Romanian Elena-Gabriela Ruse 6-3, 6-1.

Two-times major champion Muguruza staved off a late comeback attempt by Russia’s Ekaterina Alexandrova to win 6-1, 7-6(4). She next faces another Russian in Daria Kasatkina, who beat Elise Mertens 6-3, 6-4.

Spain’s Paula Badosa also advanced to the quarterfinals of the WTA 500 tournament, claiming a 6-3, 6-4 victory over Australia’s Ajla Tomljanovic.

Ninth seed Elena Rybakina withdrew from her match against Caroline Garcia of France due to a left thigh injury. The Kazakh dropped just one game in her first-round win against US Open champion Emma Raducanu on Tuesday.

“Unfortunately, after playing a lot of tennis last week and then coming to Sydney and playing last night, my body has not recovered well and my thigh is causing me problems,” Rybakina said.

In the men’s ATP 250 tournament at the same venue, former world No. 1 Andy Murray recovered from a shaky start to defeat second seed Nikoloz Basilashvili 6-7(4), 7-6(3), 6-3 in a physical encounter that lasted over three hours.

The Scot bounced back from wasting three set points on serve at 5-4 in the second set to beat second seed Basilashvili and proved himself to be in good trim ahead of his first Australian Open appearance in three years.

“I do like the physicality of tennis but I’d rather make it easier on myself,” said Murray, who is currently ranked 135.

“He (Basilashvili) is hitting the ball consistently bigger than anyone on tour. I was having to do a lot of defending and running but my legs stood up well and at the end, I served really well in the last set.”