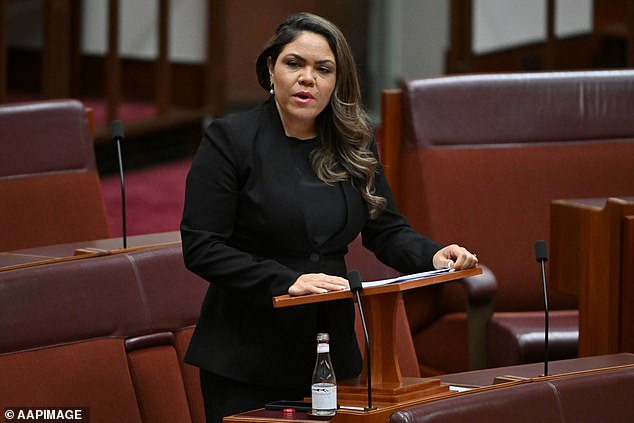 Outspoken conservative Senator Jacinta Price and Foreign Affairs Minister Penny Wong have clashed in Parliament over a plan to appoint an ambassador to represent Australia’s Aboriginal people on the world stage.

During a tense showdown at a Senate Estimates hearing this week, the Country Liberal Party MP told Ms Wong that as an Indigenous person she found the idea of such a role ‘divisive’.

Ms Price also invoked Ms Wong’s Malaysian heritage while making a point about the Voice to Parliament, the government’s plan to introduce an advisory body for Indigenous matters.

Ms Price asked the minister if she would accept having only 0.03 per cent of the Asian community having the power to make decisions that would directly impact her life.

Ms Wong was visibly annoyed but kept her voice even as she hit back: ‘Well, I’ll answer that. You want to talk about my ethnicity and my heritage, I am deeply proud and deeply grateful that the Australian people have chosen to put more people from diverse backgrounds into our Parliament.

Ms Price tried to interrupt the minister but was quickly slapped down.

‘You asked me a question about being Chinese, so I am responding,’ Ms Wong said.

Senator Jacinta Price (pictured in September) has furiously rejected plans to appoint a First Nations foreign ambassador, arguing the role will only cause further divisions

‘It is your position that the Uluru Statement of the Heart should represent us all, and I’m suggesting to you that it doesn’t,’ she said.

During Thursday’s hearing the two politicians repeatedly spoke over each other as they clashed over the ambassador concept.

Ms Price claimed the ambassador role would only further divisions between First Nations People and the rest of Australia.

‘I reject that. It’s not about segregation. It’s about inclusion. And a place in our international story that we have not told,’ Ms Wong replied.

‘I think in the world telling the full story of who we are is a good thing to do, regardless of one’s political views over the Uluru Statement.

‘This is about telling the full breadth of the story about who we are.’

Ms Price accused the government of creating the role as part of an ‘international PR stunt’ amid debate over the Voice.

Ms Wong then accused the senator of making a ‘political statement’.

‘You don’t want to hear our answer,’ she told Ms Price. ‘I’ve tried to, in good faith, explain to you senator, why we have done this, and you don’t listen.

On Wednesday, Ms Price tweeted she would hold the Albanese government to account 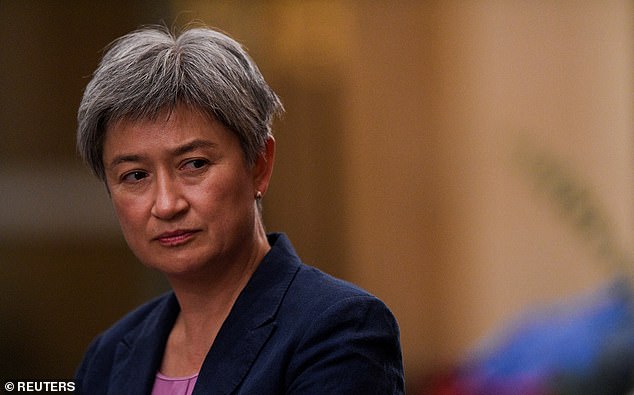 Foreign Affairs minister Penny Wong said that like any ambassador, the person who was chosen to represent First Nations people would consult widely to get a ‘diversity of views’ 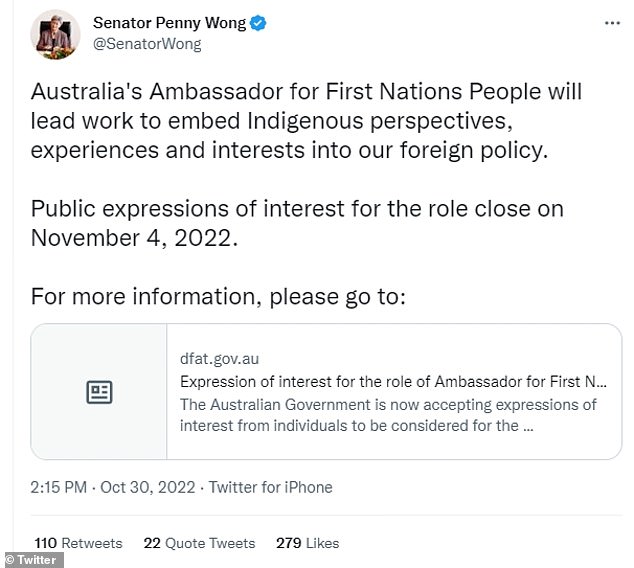 The Labor government plans to allocated $1.3million to its First Nations Ambassador budget to start a taskforce for the department, remuneration for the ambassador, international and domestic engagement as well as meeting facilitation

The foreign minister replied that like any ambassador, the person who was chosen for the role would consult widely to get a ‘diversity of views’.

During the fiery exchange, Ms Price questioned why Australia thought it was necessary to separate First Nations with their own foreign policy.

Ms Price on Wednesday tweeted she was: ‘In Senate Estimates pulling 16 hour days and holding this disgraceful Albanese government to account’.

The conservative politician, among other Indigenous leaders, has been critical of the the Indigenous Voice to Parliament, saying the proposal for an advisory body for First Nations people was another act of ‘racial separatism’.

The Labor government plans to allocated $1.3million to its First Nations Ambassador budget to start a taskforce for the department, remuneration for the ambassador, international and domestic engagement as well as meeting facilitation.