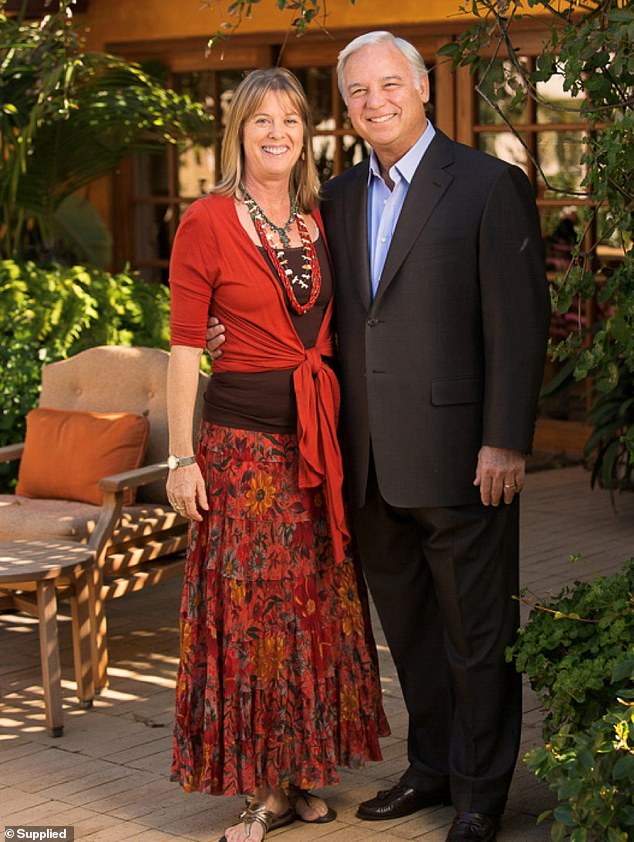 A multi-millionaire bestselling author who runs self-help seminars online has described the coronavirus pandemic as a business opportunity rather than something to fear.

New lockdowns in Melbourne and outbreaks in Sydney are intensifying fears about Australia suffering from the most severe economic downturn since the 1930s Great Depression.

Jack Canfield, the bestselling American co-author of Chicken Soup For The Soul and The Success Principles: How to Get from Where You Are to Where You Want to Be, said the COVID-19 crisis had also affected his business model of hosting sold-out seminars in packed auditoriums.

The man with 1.1million Facebook followers has given Daily Mail Australia his five secrets on how to achieve financial success during the COVID-19 era.

A multi-millionaire bestselling author who runs self-help seminars online has described the coronavirus pandemic as a business opportunity rather than something to fear. Jack Canfield is pictured with his wife Inga

Pivot during a crisis

In March, the 75-year-old motivational speaker faced a financial crisis when local governments in California banned large gatherings and imposed new travel restrictions, putting at risk $US800,000 ($A1.1million) he had collected in deposits for a motivational talk he was about to deliver.

‘I’m in a company where I do live training primarily and all of a sudden in the middle of March, they said, “No live training, you can’t put more than two people in a ballroom and you can’t travel”,’ he told Daily Mail Australia.

Instead of immediately returning that money, he offered the customers the chance to instead watch his seminar online, charging them $US900 ($A1,243) for four months worth of tutorials as an alternative to one major live stage speech.

‘It took a lot of work – we pivoted quickly,’ he said.

Identify a need during this pandemic

Canfield said the COVID-19 lockdowns were an opportunity for budding entrepreneurs to identify new customer needs.

‘Every crisis has new needs that need to be met,’ he said.

In his home city of Santa Barbara in California, high school student Daniel Goldberg saw an opportunity to deliver groceries to the elderly people self isolating at home.

With other teenagers he established Zoomers to Boomers. 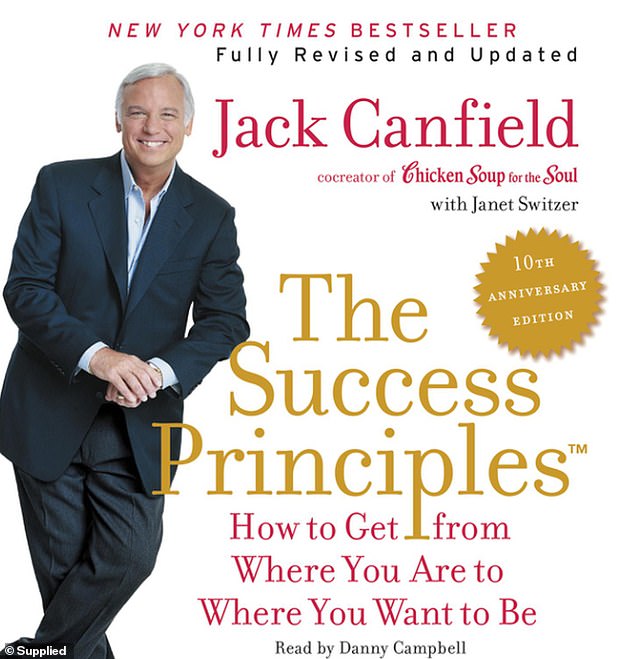 Jack Canfield, the bestselling American co-author of Chicken Soup For The Soul, The Secret and The Success Principles: How to Get from Where You Are to Where You Want to Be , said the COVID-19 crisis had also affected his business model of hosting sold-out seminars in packed auditoriums

‘All these baby boomers, who are now in their seventies, who are afraid to leave their homes because of the COVID, these kids are going out and picking up their groceries for them, and then charging them a fee for doing it.

‘A whole new business has been developed.’

From making food and selling it online to starting a home-based direct sales business or making podcasts to entertain people at home, Canfield said home isolation was a business opportunity.

‘There’s a lot of opportunity for the things that are needed,’ he said.

‘You just have to decide, what am I needing?’ 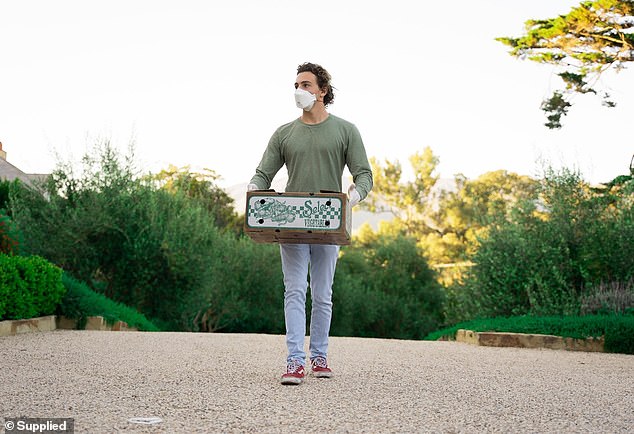 Canfield said the COVID-19 lockdowns were an opportunity for budding entrepreneurs to identify new customer needs. In his home city of Santa Barbara in California, teenagers founded Zoomers to Boomers

He advised budding entrepreneurs to think about the needs of those who were struggling with home isolation. 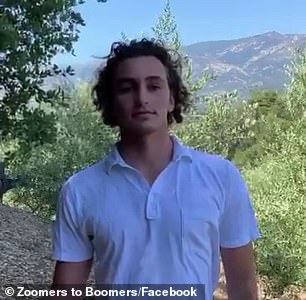 ‘People are bored so what can you do to provide more entertainment?,’ he said.

‘A lot of people are lonely. Literally, just talk to people, coach people. Bring people into mastermind groups, things like that online.’

Canfield said too many people became so fearful they imagined the worst possible thing that could happen to them during this pandemic – if they didn’t catch COVID-19.

‘Psychologically, dealing with fear – fear is created by imagining the future being bad,’ he said. ‘The point is worrying is just negative goal setting.’

He said a crisis like COVID-19, the worst global pandemic in 100 years, had activated the part of the brain focused on negativity.

Unemployment during June amid COVID-19

Australia’s unemployment rate climbed from a 19-year high of 7.1 per cent in May to 7.4 per cent in June – the highest since November 1998

Close to a million people unemployed for the first time ever – surpassing 960,200 record set in December 1992

Unemployment increased even though 210,800 more people were employed as COVID-19 shutdowns eased

That was because the participation rate increased from 62.7 per cent to 64 per cent as more people looked for work

‘What happened when the pandemic hit: everyone went into fear,’ he said.

‘When you go into fear, the energy in your brain goes from the prefrontal cortex – which is rational thinking, creative thinking, intuitive insights – and it goes back into the amygdala – the back part of the brain which basically hijacks the front part of the brain.

‘Then we start having fear and then we go further back into the hippocampus which is where negative memories live.’

Individuals aren’t the only ones worrying with Treasury economists expecting Australia’s unemployment rate to surge to 9.25 per cent by Christmas, reaching a level unseen in Australia since September 1994.

The jobless rate is already at 7.4 per cent, the highest in almost 22 years, and almost one million people are officially unemployed, a record for Australia, before those who have given up looking for work are even acknowledged in the statistics.

Private credit went backwards in May and June, the first-back-back decline since 2009 during the Global Financial Crisis, the Reserve Bank of Australia revealed on Friday.

Then there’s the fact Australia is set to sink into a recession in 2020 for the first time in 29 years.

Despite those grim economic statistics, Canfield said Australians needed to train themselves to stay psychologically strong by seeing the good things that could happen in a crisis.

‘Now most people, they’re not trained to do that.’

Have the right skills to benefit from a crisis

Jaffas were invented in Australia in 1931, with James Stedman-Henderson Sweets finding a following with orange-flavour coated chocolates at the height of the Great Depression. 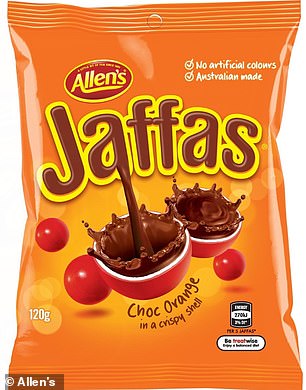 The first Jaffa lollies were invented in Australia in 1931, with James Stedman-Henderson Sweets finding a following with orange-flavour coated chocolates at the height of the Great Depression. Swiss multinational Nestle’s now owns the trademark

That was shortly after the oil crisis had caused a recession and an inflation surge that would spark a savings and loans crisis.

Despite the economic malaise, they saw the potential of a personal computing revolution.

Canfield said that even during a severe economic downturn, innovation was possible with the right skills.

‘Every recession, the Great Depression, major companies get formed,’ he said.

This involved recognising what skills someone needed to develop.

Canfield said aspirational entrepreneurs needed to have self awareness.

‘Anyone can become an entrepreneur. Some people are born naturally, let’s say their personality is more aligned with that. They’re a fast talker, they’re positive,’ he said.

Switch out of bad habits

Success also means having focus and switching out of bad habits.

Canfield would start with switching off the news and dedicating time to more beneficial activities. 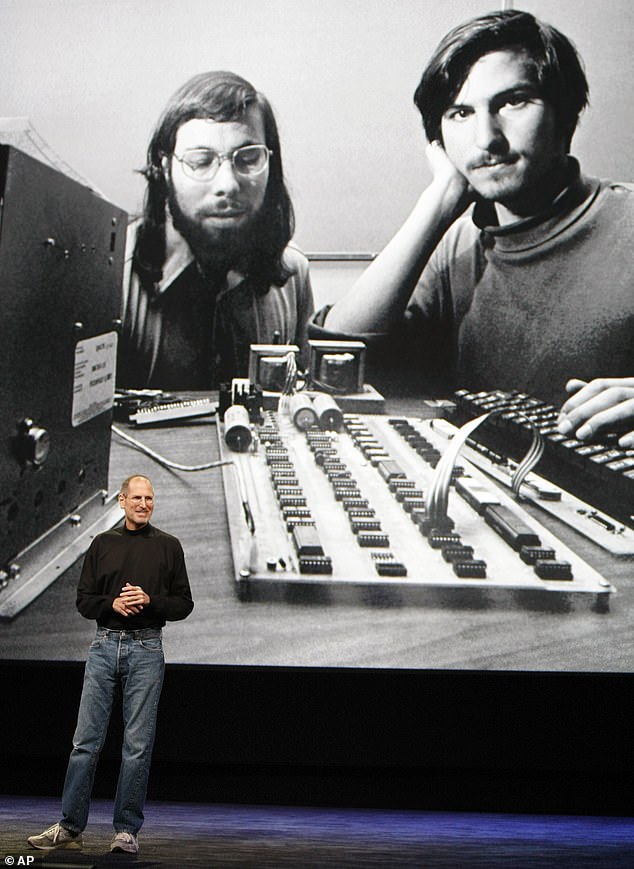 In the United States, Bill Gates founded software company Microsoft in 1975, a year before Steve Jobs (left during the 1970s and in 2010 on stage) and Steve Wozniak (right) co-founded Apple computers

‘There are hundreds of podcasts teaching people what to do, how to build an online brand, how do do a podcast, do social media so there’s nothing you can’t learn and most of it’s free.

‘But many people, they get so scared they forget, they are in the habit of just coming home from a job that pays minimum wage or middle-class lifestyle that’s kind of dried up.’ 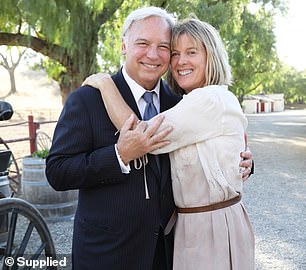 Canfield said bad habits were a form of addiction that needed to be kicked.

‘They don’t have the habit of studying and growing so they binge-watch TV,’ he said.

‘You literally have to discipline yourself because it’s a habit: all habits are very difficult to break.’

The self-help expert recommended accepting it would take at least two months of ‘intentional effort’ to kick a bad habit.

‘You just don’t turn on the TV. I had to rid myself of the habit of playing games late at night – I was wasting an hour a day,’ he said.

The worst habit is being addicted to fear.

‘We’re wasting time doing the negative things that are reinforcing our beliefs,’ he said.

‘All crises create opportunities, more for some than others, no question.’

Jack Canfield is hosting a free live stream seminar, How To Make Multiple Streams of Internet Income at 10am AEST, August 8 across Australia at www.jackcanfieldlivestream.com