Queen Elizabeth II with Melania Trump during the reception in Buckingham Palace, London, as Nato leaders gather to mark 70 years of the alliance on Tuesday December 3

This week, Melania Trump did something extraordinary. During a busy few days accompanying her husband to a bad-tempered NATO summit in London, she met the Queen, took tea with Prince Charles, and made Christmas decorations with London schoolchildren.

While her husband angrily derided Canada‘s President Trudeau as ‘two faced’ for mocking him behind his back, Melania remained her usual inscrutable self- beautifully dressed, heavily made up, saying nothing.

She remained silent – until the moment thousands of miles away when a Democrat lawyer in Washington mentioned her son, Barron during a discussion at the pre-impeachment hearing.

Describing what rights a monarch (as opposed to a President) can use, Pamela Karlan got a cheap laugh by joking ‘a President can name his son Barron, but he can’t make him a Baron’.

Immediately, Melania tweeted her displeasure- ‘a minor child deserves privacy (Barron is just 13) and should be kept out of politics….you should be ashamed’.

Karlan had made a fatal error, which allowed the Republicans to claim the moral high ground for once. She swiftly apologised.

On Twitter, critics were swift to point out that Melania’s husband had no scruples about criticising 16-year-old climate change activist Greta Thunberg or any misgivings about separating the small children of migrants attempting to enter the USA, holding them in detention centre ‘cages’. 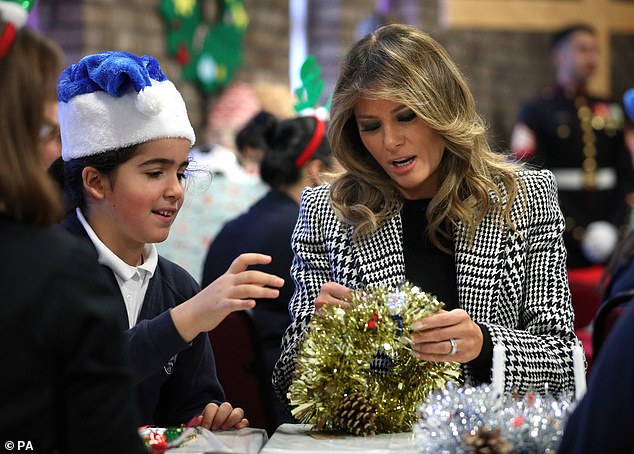 Melania’s tweet was a rare example of a direct opinion from someone who rarely expresses her thoughts in public.

The First Lady remains a mystery. Is she stupid? Cold? Insecure? Is she permanently furious with her husband, who seems to be her polar opposite?

Feminist or Trophy Wife? There’s never been a First Lady who we know so little about.

This week, an unauthorised biography Free, Melania (with that confusing comma) has been published, and we remain none the wiser.

Written by CNN reporter Kate Bennett, its 300 pages reveal about six new things about the First Lady, including the fact that not only does Melania have her own bedroom in the White House, it’s on a separate floor.

And the President has had a lock installed on the door of the Master suite, which he uses.

Is this so surprising? He’s up all night watching news and glugging sugary drinks, waking at 5am to tweet mad invectives.

No wonder a glamorous 49-year-old woman who is photographed every five minutes of her day values her sleep. 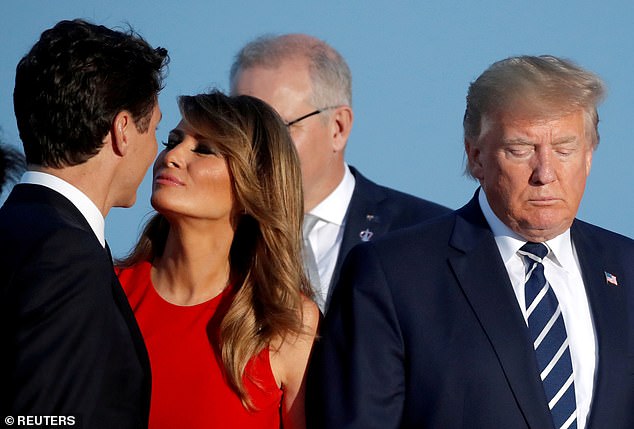 In reality, the most interesting thing about Melania is her obsession with privacy, whilst occupying the most public office in the world.

During her first year, she made just eight speeches, whereas Laura Bush gave 42 and Michelle Obama 72.

After the disaster of her speech at the Republican Convention (which turned out to have passages high-jacked from one Michelle Obama gave eight years earlier), it’s not suprising that Melania subsequently decided to keep quiet.

You might wonder why one of her husband’s team had not bothered to check what Melania planned to say that day. Her embarrassment was surely the result of Trump’s disorganised staffing, where dozens of aides came and went every week.

Melania is said to be kind, professional and considerate towards her own staff.

Bennett’s book also claims Melania suspects that Trump’s close ally Roger Stone, was involved in the leaking of nude photographs of her (taken in 1996 during her modelling career) to the press during the closing weeks of the Presidential campaign in 2016. 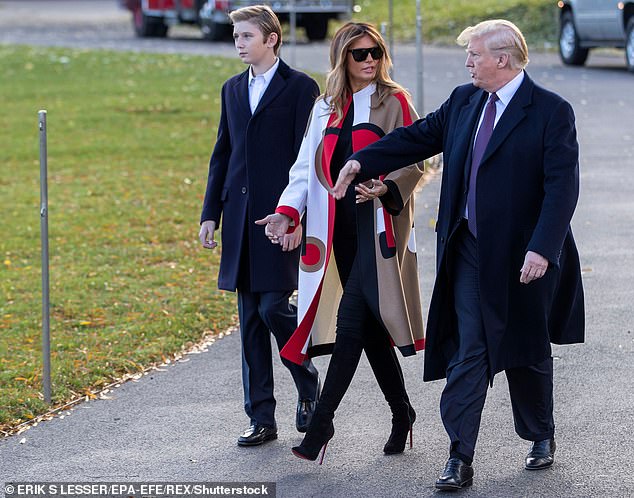 Donald Trump, First Lady Melania Trump and their son Barron walk to Marine One on the South Lawn of the White House in Washington DC, on November 20 2018

After three years of Trump, we know as little about Melania as we did on Day One.

This week, some schoolchildren in London gave their impressions, following a photo-op for the Salvation Army.

Out of the mouths of babes come some home truths- a nine-year-old thought the makeup was ‘a bit much…it made her look sad but actually she was very happy’.

The kids expected her to be grumpy (not surprisingly) and were astonished to find she was ‘very nice.

Unlike her contemporaries, Melania believes that less is more. Whereas Gwyneth and co babble about colonic cleansing, conscious uncoupling and vaginal steamers online, the First Lady has developed her own non-verbal forms of communication.

Tiny gestures – like when she flicked away her husband’s hand in Tel Aviv and nudged his elbow on the White House balcony during the National Anthem.

The times she has refused to pretend they are actually speaking, when he’s clearly driving her crazy..

There’s the carefully chosen clothing – she loves a cape, it makes her look even more imperious. 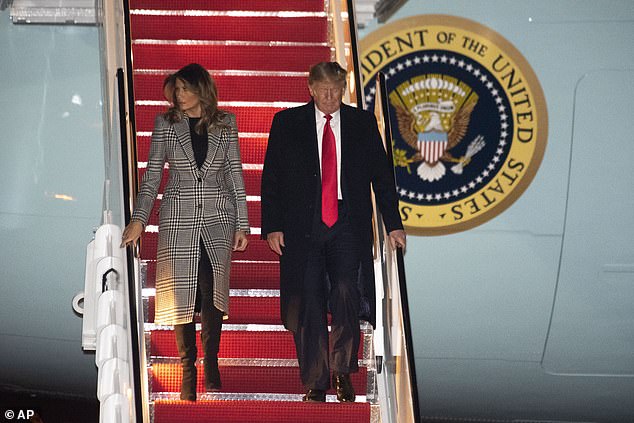 Not for Melania the kooky suits adopted by Brigitte Macron, who favours short skirts and a sixties haircut. Melania prefers curiously grown up formal tailoring, power dressing in stiff fabrics.

Her makeup is unchanging, no matter what continent, climate or location she finds herself in. Melania has perfected her brand; female warrior.

At Buckingham Palace this week, she refused to remove the long yellow coat by Valentino worn to tea at Clarence House.

Photographed with Prince Charles and Camillia, she appeared strangely immobile, towering over everyone in fuschia pink shoes.

More regal than the royals or just frightened of doing the wrong thing? A personality or a prop?

According to Bennett, Melania consistently uses clothing to send a message, wearing modest, masculine outfits when she and the President are not getting on.

Trump loves short sexy dresses, so she chooses trouser suits when they’ve had a disagreement.

When the scandal erupted over a leaked tape revealing Trump’s remarks about grabbing women’s genitals in 2016, Melania wore a pink blouse with a big bow. Was it signifying support for the sisterhood?

Either way, she has made some really poor choices – the outfits worn on the trip to Africa in 2018 were god-awful.

The pith helmet in Nairobi, worn with brown boots and a white shirt, like a bonkers character from Raiders of the Lost Ark. The Fedora hat and the linen suit by the Pyramids – what movie was she starring in?

The biggest clothing cock-up of all was the Zara parka emblazoned with ‘I really don’t care, do U?’ worn in 2018 on a visit to a child detention centre.

Melania says she only wore the jacket to get on and off the plane, and yes, it was a message – but to who? Bennett’s book implies she was targetting Ivanka, and that the two women have a relationship that is cordial but distant.

Melania is said to resent the access the president’s daughter enjoys, and the fact she positions herself centre-frame on so many foreign trips. Ivanka may be branding herself as the smart businesswoman, but is Melania not performing a valid role – keeping her husband in check?

Is that not as important as whatever shoes and handbags Ivanka (now a budding diplomat and women’s rights expert) once flogged?

Melania’s charity Be Best, remains unfocused and will never amount to anything much. She can’t compete with Michelle in that department. But it’s not that important.

In 2008, Curtis Sittenfeld wrote the best-selling novel American Wife, a fictionalised account of the life of Laura Bush, who never discussed her private thoughts or her inner life.

A woman who was accused of being stiff and formal, always heavily made up. A woman whose husband was hated by millions of people.

Doesn’t that all sound familiar? Sittenfeld (a Democrat) admired Laura Bush, who was said to be a very nice unpretentious woman.

We should accord Melania Trump the same courtesy. Who would want to be in her high heels anyway?.