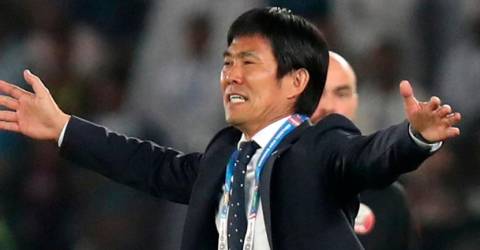 SAITAMA: Under-fire Japan manager Hajime Moriyasu (pix) urged his team to build on the dramatic 2-1 win over Australia on Tuesday that jolted their flatlining World Cup qualifying campaign into life.

Japan went into the crunch home match having lost two of their opening three games in Group B, but took three crucial points thanks to an 85th-minute own goal from Australia’s Aziz Behich.

Japan still trail Australia and Saudi Arabia in the battle for the group’s two automatic qualifying spots for Qatar 2022, but Moriyasu said Tuesday’s win can give his players renewed belief.

“We kept fighting until the end and never gave up – we are determined to get to the World Cup and we showed that tonight,” said the manager.

“It was a great win but we still have a lot of tough games to come. We have to make sure we use this win and build on it.”

Japanese media had speculated that Moriyasu could lose his job with anything less than a win, and the manager made a special point of applauding fans behind the goal after the final whistle.

“I wanted to thank the fans for their support – they gave the players courage,” he said.

“It was a very difficult game, but the fact that the players kept going to the end was down to the support they got from the crowd.”

Japan went into the game knowing that anything less than a win would put them in serious danger of missing out on the World Cup for the first time since 1994.

Ao Tanaka gave them the perfect start with the opening goal in the eighth minute, only for Australia’s Ajdin Hrustic to equalise with a 69th-minute direct free kick.

But Behich turned the ball into his own net with five minutes remaining, after Takuma Asano’s shot rebounded off the post.

“I thought especially in the second half we dominated.”

Takumi Minamino played a low cross that Behich failed to cut out for Japan’s opener, and Tanaka was on hand to drill the ball past goalkeeper Maty Ryan.

But the Socceroos hit back in the second half, and thought they had been awarded a penalty when Hidemasa Morita tripped Hrustic.

The referee changed the decision to a freekick on the edge of the box after a VAR review, but Hrustic slammed the ball past Shuchi Gonda regardless.

Japan went in desperate search of a winner, with Ryan denying Junya Ito and substitute Kyogo Furuhashi before Behich scored in his own net.

“The win record is over but we still hold that record, and it’s a fantastic achievement by the players,” said Arnold.

“We can stop talking about it now and move forward with the World Cup campaign.” – AFP