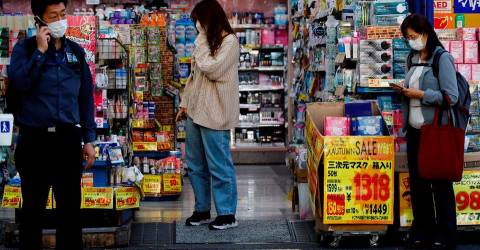 TOKYO: Japanese inflation hit a four-decade high last month, government data showed Friday, fuelled by high energy costs and a weak yen and ramping up pressure on the central bank to move away from its ultra-loose monetary policies.

The reading marked the fastest pace since 1982, although it remains below the sky-high levels that have pummelled the United States and other countries.

In reaction to the data, chief cabinet secretary Hirokazu Matsuno told reporters the government “must protect people’s livelihoods from these price rises”.

“Price increases have continued for items closely related to daily life such as utilities and food, due to rising raw material prices and the weak yen,“ he said.

The government said last month it would spend $260 billion on an economic stimulus package that includes support for energy bills, which have spiked since Russia’s invasion of Ukraine in February.

“Policies targeting energy and food, which are the main causes of high prices” are included in the relief measures, Matsuno said as he vowed to “pass the extra budget as soon as possible”.

Darren Tay, Japan Economist at Capital Economics, told AFP that the impact of inflation on the average consumer was “very real”.

Prime Minister Fumio Kishida has responded with an “aggressive” stimulus package because “he knows that his electorate is not too happy with rising prices”, Tay added.

When energy prices were not taken into account, October’s inflation was a more moderate 2.5 percent, but still higher than in September.

The US Federal Reserve and other central banks have sharply hiked interest rates this year to tackle inflation.

But Japan, which since the 1990s has swung between periods of sluggish inflation and deflation, has gone against the grain and continues to keep interest rates at ultra-low levels as it tries to kickstart the torpid economy.

Although inflation is now higher than the two-percent targeted by the Bank of Japan for the past decade, it sees the recent price rises as temporary and says there is no reason to change course.

The starkly different approaches taken by the BoJ and the Fed have driven down the value of the yen against the dollar this year from levels of around 115 yen per dollar in March to 140 on Friday, having hit a 32-year low of 151 yen last month.

But while the bank keeps a close watch on inflation, Tay added: “I still don’t think it’s enough for them to change their policy at this point.”

One reason is that Japan’s latest growth data, released on Tuesday, showed a surprise contraction of the world’s third-largest economy in the July-September quarter.

“That shows the bank very clearly that the economy is actually on much shakier footing than they might otherwise have expected,“ Tay said.

“The other thing is the global economy is probably going to enter a recession next year, in the first half,“ he added.

“We’re basically looking at very weak economic conditions overall, and the Bank of Japan will not risk jeopardising the economy even further by tightening monetary policy at this point.” – AFP