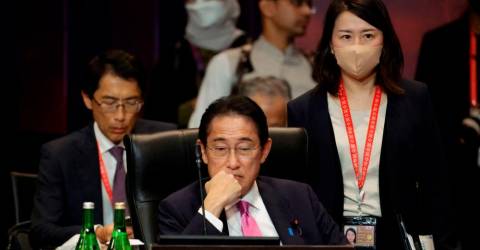 The two countries are key trading partners, but relations have soured in recent years as Beijing bolsters its military, projects power regionally, and takes a harder line on territorial rivalries.

Kishida said he had “expressed serious concerns over the situation in the East China Sea, including the Senkaku islands,“ referring to Tokyo-controlled disputed islets that Beijing calls the Diaoyus.

He said he had also raised concerns over “China’s military activities including ballistic missile launches from China”.

In August, Chinese missiles fired during massive military drills around Taiwan are believed to have fallen within Japan’s exclusive economic zone.

“I stressed the importance of peace and stability of the Taiwan Strait,“ Kishida said, adding that the leaders had “agreed on strengthening communication in the field of security”.

Kishida spoke to Xi on the phone in October 2021 after being elected prime minister, but this is their first in-person meeting.

Xi last held face-to-face talks with a Japanese prime minister in December 2019, when he met Shinzo Abe in Beijing.

Kishida said he had “reiterated Japan’s position on human rights and detention of Japanese citizens in China” to Xi.

“On North Korea, I expressed our expectation that China will play a role including in the UN security council,“ he said, hours after Pyongyang fired the latest in a record missile blitz.-AFP