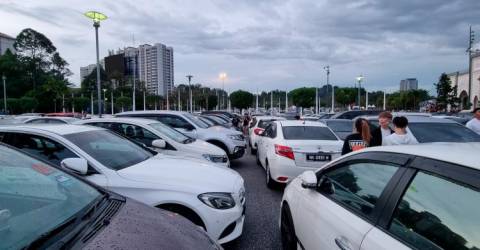 TAIWANESE Mandopop sensation Jay Chou has made headlines again for due to his management allegedly allowing double parking at his concert venue in the Bukit Jalil National Stadium.

The concert was also held around the same time as the Petronas Malaysia Open 2023 held in the Axiata Arena located in the same area as the stadium.

Twitter user @hannahgyeongs explained that once she exited the Malaysia Open 2023 match, she and many other attendees found the carpark area was completely full and there was no other way out due to being blocked by Jay Chou concert-goers.

Hannah added that the badminton match ended at around 6.30pm and almost everyone left the arena by 7pm.

“When we got to the parking it was completely full. Cars we parked at the legal boxes were blocked,” she said in her Twitter post.

She also stated that the concert-goers and badminton match attendees had paid a lot of money to attend these events and for parking too.

“We paid lots of money to come to this event! (RM 100-700 for finals) Then we were forced to pay RM20 for parking. Yet we couldnt get out when we wanted to leave,” she added.

Hannah mentioned that the cars that double parked had left their phone numbers to contact them, but refused to come down and move their car as they were enjoying the concert.

Meanwhile, the carpark management said that the double parked cars would be towed away for the badminton match attendees to exit the location.

“They said they would tow the cars which double parked; but that’s unfair to everyone. To the Axiata guests forced to wait hours for towing to come.

“To the concert guests who would have their cars forcefully towed after paying for parking and allowed to double park,” she pointed out.

In spite of the chaotic situation, Hannah was able to leave the stadium after an hour but noted that others were stranded for a longer period of time.

“I was finally able to leave at around 8pm (after over an hour of waiting) as a few kind, responsible people who parked behind my car agreed to come down and move their cars. But a lot of cars were stuck there for much longer,” she said.

Hannah then called out the Petronas Malaysia Open 2023 and Jay Chou’s concert organisers for their lack of proper carpark management that had inconvenienced everyone as well as Sports and Youth Minister Hannah Yeoh for lack of proper organisation.

“This mess could have been simply avoided if the managements and organisers liased with one another. The PMO2023 organisers/sponsors and Jay Chou concert organisers should have thought this through.

Special attention to the sports minister @hannahyeoh also as you guys should have seen through every bit of a world tour sporting event. Even the parking!! Do not embarass Malaysia,” she said in her post.