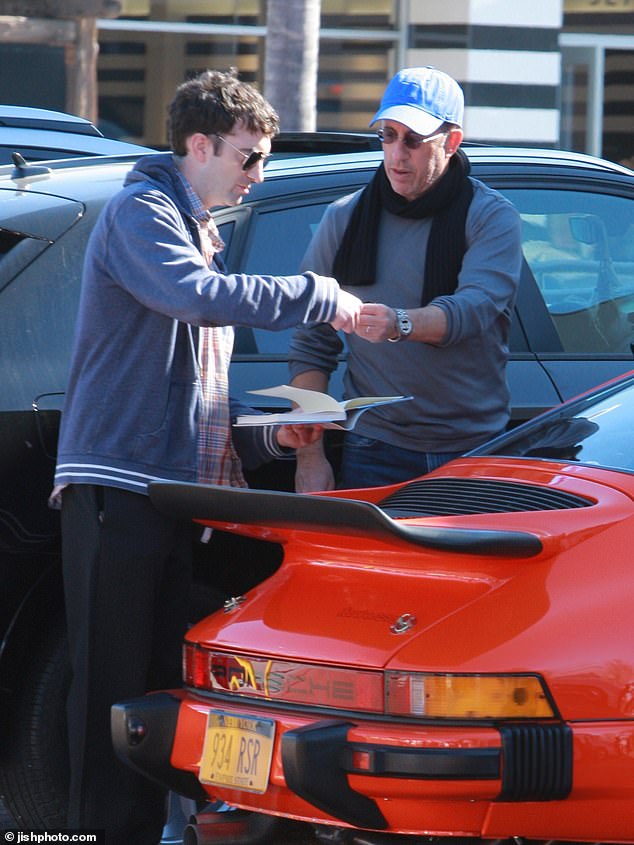 Landlords at a swanky Malibu shopping mall are at war with Jay Leno, Jerry Seinfeld, and their car enthusiast friends who say they’re being treated like the ‘MS-13 of Malibu’ for their weekly car gathering after word got out, according to a report.

For years, the legendary comedians would meet with fellow vintage Porsche-loving pals – including attorney Paul Zuckerman and writer Spike Feresten – every Sunday for breakfast at the Malibu Kitchen in the Malibu Village plaza, The Los Angeles Times reported.

Their lowkey ritual went under-the-radar until the pandemic, when hundreds of fellow motorheads with nothing better to do began jamming up the center’s parking lot on Sundays.

‘We’ve been doing this for 15 years,’ Zuckerman told the Los Angeles Times. ‘But suddenly we’re like the MS-13 of Malibu.’

Seinfeld is seen meeting up with his Porche club pals at Malibu Kitchen in Malibu, California 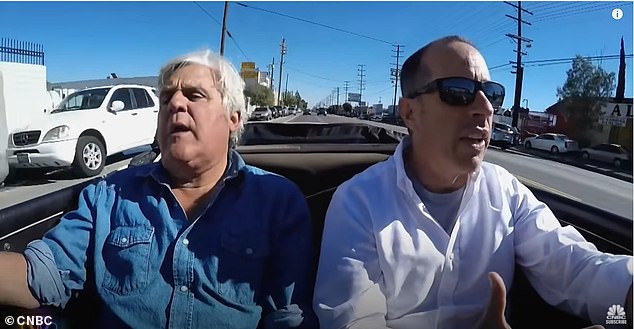 For years, Jay Leno (left) and Jerry Seinfeld (right) would meet with fellow vintage Porche-loving pals –every Sunday for breakfast at the Malibu Kitchen in the Malibu Village plaza,

The small weekly ritual had snowballed into a battle between car enthusiasts, landlords, and police were called in to control the situation.

Malibu Village’s landlords began hiring private security to police the convoy of cars until mid-morning, but when the barricades were lifted before lunchtime, a crush of vintage cars would cruise in, the outlet reported.

The Los Angeles Sheriff’s Department has been staffing the scene since 2020, said motor deputy Justin Forbes.

‘The landlords complained that there was no parking for their customers or even their employees,’ Forbes told the Times. ‘So we were called in to assist.’

Avital Stone, an employee at nearby Marmalade Café, said the car gathering was unacceptable.

‘They have ruined our business,’ she told the Times.

‘Before 10 o’clock, our customers can’t get into the parking lot, and after 10, they can’t find anywhere to park. The car show — it’s been made clear they are not wanted here. But I truly believe that if they didn’t block off the parking lot, they’d all be gone by 10. If there was no blockade, it would be better.’

Landlord Steve Soboroff, who spends $20,000 a year on security for the local Malibu Country Mart, said he was also irked by the gatherings. 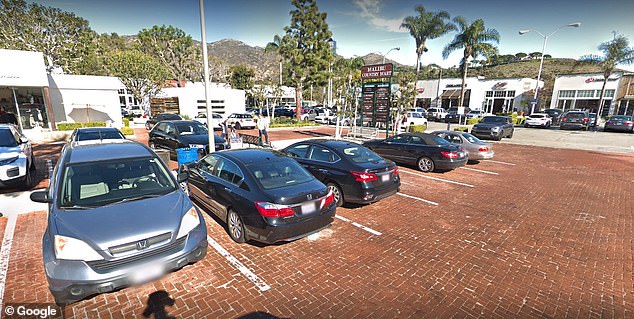 The comedians’ ritual caught on in 2020 after the pandemic, prompting hundreds of other car enthusiasts to cruise into the shopping center on Sunday mornings 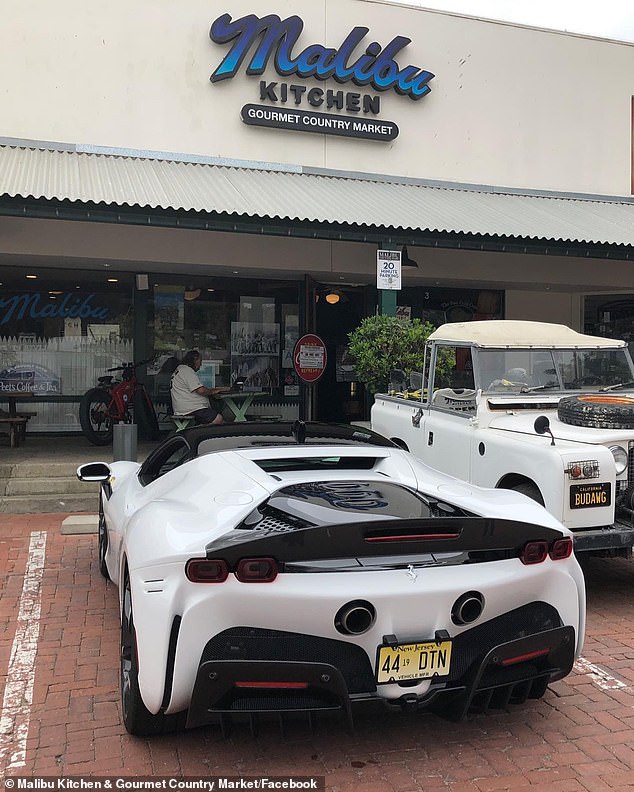 Landlords began complaining about the gatherings, saying they’re taking up too much space 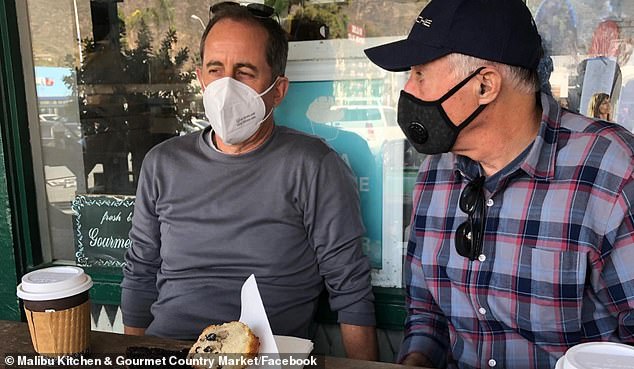 Seinfeld, pictured with a friend at the Malibu Kitchen, said he’s ‘not surprised the trend took off 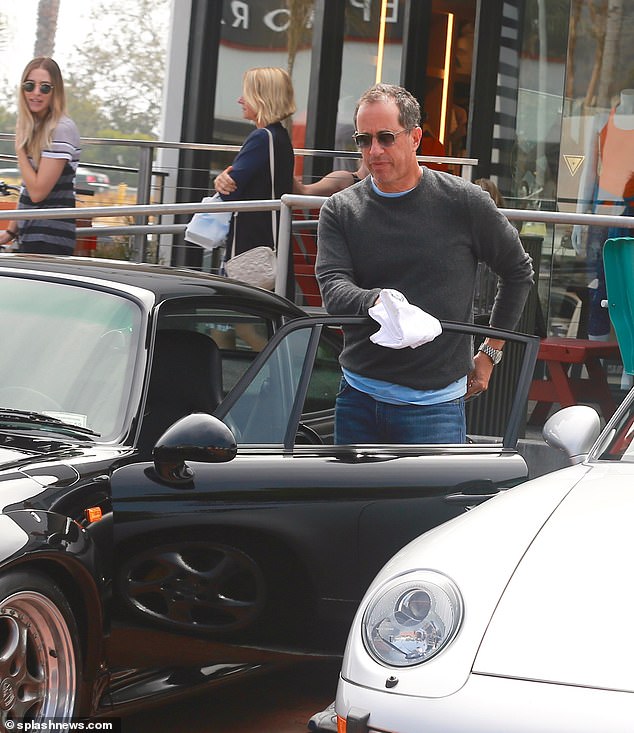 Said Seinfeld: ‘Spike Feresten and I invented driving to Malibu Kitchen in a cool car to get coffee 20 years ago’

‘We tell people, ‘If you want to come in and get a coffee, that’s fine. But if you want to raise your hood and hang out for four or five hours, go somewhere else, or you’ll be towed,’ he told the Times.

‘It’s not Leno and those guys. They’re fine. But someone who says they went to Whole Foods and bought a stalk of celery and then wants to hang out for four hours? I won’t tolerate it.’

Seinfeld said it came as no shock that others began embracing a trend he started decades ago.

‘Spike Feresten and I invented driving to Malibu Kitchen in a cool car to get coffee 20 years ago,’ he told the outlet. ‘I’m not surprised the idea has taken over the entire city.’ 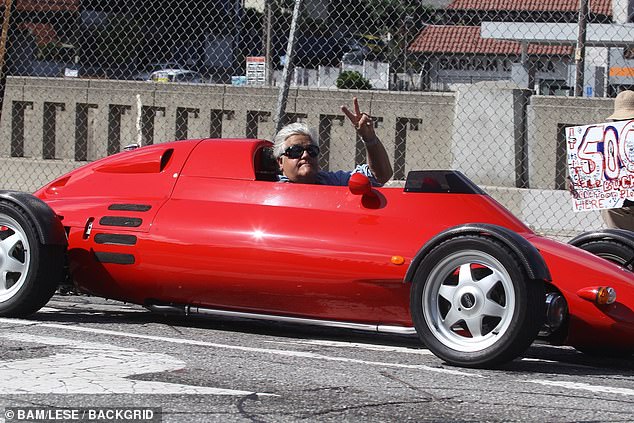 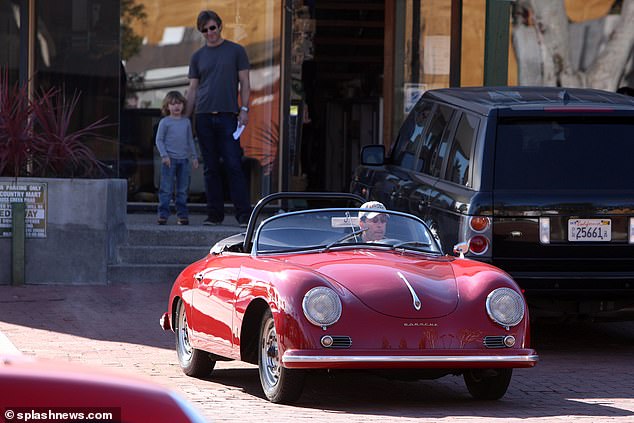